Saturia a gem from Geisel Park

Saturia was bred and sold by Geisel Park for $32,5000 at the Perth Magic Millions in September 2015 and she was always in control of the Seacorp Plate (1000m) at Belmont last Saturday.

After being sent to the lead by jockey Craig Staples, the speedy filly kept lifting when challenged by the favourite Epic Grey to score by a head.  “The cutaway didn’t help,” trainer Paul Jordan said.  “We teach them to rail but they come here and run into an open paddock.  She wandered about in the straight and there’s plenty of improvement in this one.”

Saturia is a 3yo filly by Yarradale Stud sire War Chant (USA) and arrived in the same crop as his recent Belmont winner Aflica’s Girl.  Her dam Hot Tamale (Oratorio) was also trained by Jordan and had the speed to cross most fields from an outside gate. 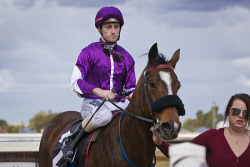 Trainer Lindsey Smith announced Goldfields plans for Mr Motown (pictured) after he led all the way at Belmont.  The LR Hannans Hcp (1400m) is the target on September 20 and it would be appropriate if he saluted in the feature sprint.

After a career training top-class gallopers like Brechin Castle, Cramp transferred to the hotel trade and ran the Hannans Hotel on Hannans Street.  The pub was decorated by a selection of Brechin Castle’s 19 wins headed by the 1979 WA Oaks when it was a Group 1.

“He’s got to stretch out to 1400m and maybe that’s not his best distance,” Smith reasoned.  “We will just see how he goes between now and then and hope for the best.”

Mr Motown is by Mungrup Stud champion Oratorio and changed hands for $120,000 out of the Geisel Stud consignment at the 2013 Perth Magic Millions.  Rigg kept a share and the gelding has returned more than $260,000 boosted by Westspeed bonuses of $42,500.  There’s another $120,000 at the Kalgoorlie round next month.

Saturday’s double followed the debut win by Dobell in Adelaide last week.  He sports the 8ER brand could make a quantum leap into Listed company for the Morphettville Guineas (1600m) on September 9.