Lark Hill trainer Annie King doesn’t have many in work – six or so – and that’s just the way she likes it.

However, King was thrown into the spotlight on Saturday when her 8yo galloper Miki Two Toes won the biggest race of his – and her – career by capturing the Listed Farnley Stakes (1400m) at Belmont Park.

Previously stakes placed in the Hyperion Quality in June, Miki Two Toes was sent out a $6 second pick behind the heavily backed Just Act Natural.  He gained an inside run at the 200m mark and managed to collar the favourite by a long neck.

“He’s just amazing and deserves that win – it’s been a long time coming,” King told Aushorse.  “He always showed ability but hurt himself as a 3yo and that set him back a fair bit.  He was keeping pace with a lot of good horses before he got injured and could easily have won a stakes race back then.

“He’s no champ by any stretch but is honest as the day is long.  He’s by Patronize and a lot of them are like that.”

With Saturday’s black-type breakthrough, Miki Two Toes has won 12 of his 61 outings, with 16 further placings and over $500,000 in prizemoney.

Patronize stands at Darling View Thoroughbreds and he got the Farnley winner from Marooned mare Nippon Pearl.  “Adam Durrant gave me Miki Two Toe’s half brother Mr Mikimoto to train and he won a race for us at Pinjarra just before the sales,” King recalled.  “That gave us the money to buy Miki Two Toes for $15,000 at the Perth Magic Millions.

“As for the name, his other part-owner Mick Ryan used to be a boxer and that was his nickname.”

Miki Two Toes will head to Kalgoorlie for the Listed Hannans Hcp (1400m) on Wednesday week, September 20.  “He’s been to Kal before in 2015 and was probably unlucky in the Hannan’s that time,” King added.  “So we will have another crack this year.”

Miki Two Toes is the second stakes winner for Redoute’s Choice stallion Patronize who is a three-quarter brother to Champion Sire Exceed And Excel.  He boasts a more than respectable strike rate of 64% winners-to-runners headed by Enchanted Dream, Mystic Maid, Jestpatim, Parading and Midnight Drama.

Patronize is based at Darling View for a $4,400 (inc gst) service fee.  He stands alongside G2 Karrakatta Plate winner Lucky Street who is currently covering his first book at the Mundijong stud. 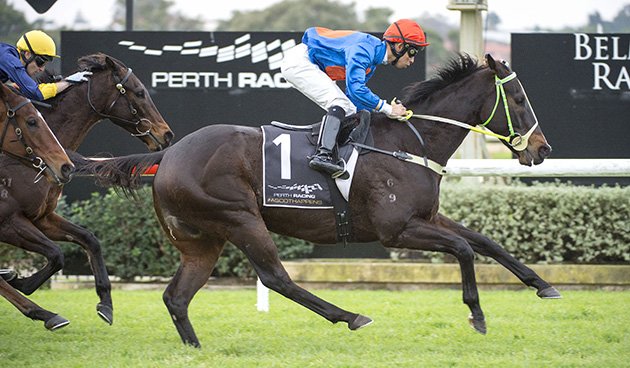