Up-and-coming sprinter Andaz will head back to Melbourne following a stakes placing in Sydney on Saturday.

The son of Dash For Cash had won his first two starts at Geelong and Flemington earlier this year and stepped up to black-type company for the first time in the LR Brian Crowley Stakes (1200m) at Randwick.

“That was a terrific run,” jockey Damian Browne said after the grey went down a half-length to Goodfella.  “He travelled well and really hit the line.”

Andaz (3g Dash For Cash – Amoroso by Revoque) impressed trainer Chris Waller following his first loss, first-up at Randwick on September 2.  “He did too many things wrong that day so I asked Damian to ride him a bit more conservatively and get him to switch off.  Now we will probably run him during Melbourne Cup week.”

Waller has several options at Flemington including the Subzero Challenge (1400m) which is restricted to grey gallopers on VRC Oaks day.

Andaz can continue a family tradition in the Benchmark 90 sprint which is worth $120,000.  His older sister Arinosa won the race in 2012 before graduating to a Group 2 victory in the Sapphire Stakes at Randwick.

Dash For Cash has sired five winners in Victoria this month, two of them on debut, including Grey Shadow for premier trainer Darren Weir at Kyneton last Tuesday.

Grey Shadow is a 3yo homebred for Valda Klaric and won despite a slow getaway first-up over 1100m.  “She took a backward step at the start but I wasn’t concerned,” jockey Jamie Mott said.  “I gave her a squeeze and she came back underneath me and travelled nicely.

“She’s a lovely filly and it was a soft win.  I think she’s has a nice future and will keep improving into open grades.”

Dash For Cash sired her from Masai Miss (Choisir) who started her career winning a Yarra Glen maiden for trainer Greg Eurell.   Runner-up Dubleanny went on to stakes success at Flemington and Morphettville. 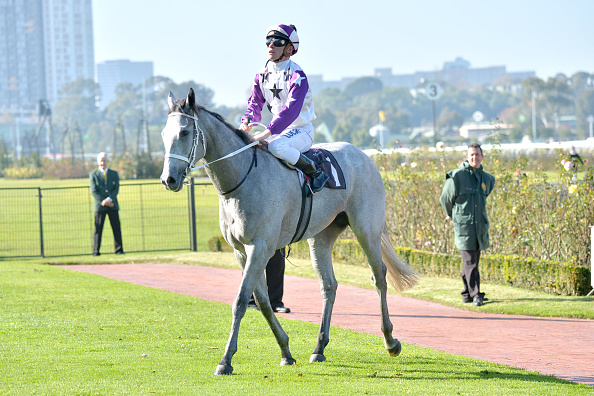