Mike and Jill MacDermott have joined the list of Sunspeed breeders to taste stakes success in Melbourne this year.

Their mare Cool Passion burst through heavy traffic to nail the G3 Northwood Plume Stakes (1200m) on Saturday.  It was the second victory in a row for WA in the sprint race for mares on Caulfield Guineas day – Sheidel won it for Des de Largie last year.

Cool Passion (Not a Single Doubt) improved her strike-rate to 9 wins in 18 starts for $326,000 in prizemoney.  Initially with Justin Warwick, she broke a Bunbury track record winning her maiden and then completed two separate hat-tricks at Ascot and Belmont before transferring to Tony McEvoy earlier this year.

“To pick up a black type win for the owners is fantastic,” McEvoy said.  “She’s ticked that box and it won’t be her last – there’s plenty of options ahead.  I’m still learning about this mare and I’m already a fan.

“I thought she was very unlucky at her first two runs for me – with any luck she wins both.  But she sprinted strongly today once Luke (Currie) got her balanced and into the clear.”

Jane Henning of Pedigree Dynamics bought her dam Hiavanna (Mister C) on behalf of the MacDermotts for $67,500 at the 2006 Inglis Easter Broodmare Sale.  Then a 12yo mare, her earlier foals included Randwick stakes winner Havana Wind (Spinning World).

They are weighing up the alternatives towards New Year’s Day.  One possibility is a first-up tilt at the G1 Railway Stakes (1600m) on November 25. 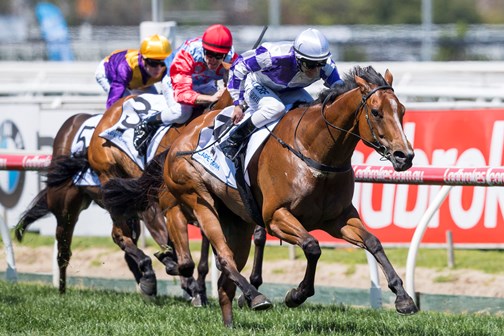