Caulfield trainer Andrew Noblet nominated his star mare Silent Sedition for two races at Flemington this Saturday before deciding to run her in the G1 Myer Classic (1600m).

The Group 1 winning daughter of Yarradale Stud sire War Chant (USA) has been building up to a mile after being beaten a length and change in the G2 Gilgai Stakes (1200m) and G2 Tristarc Stakes (1400m).

Australia’s most prestigious race meeting is a proper stage for Silent Sedition who won the G1 William Reid Stakes at Moonee Valley in March.  She also holds entries for Ascot’s TAB Touch Masters, however, Noblet wants to limit her current campaign for a concentrated assault on the autumn carnivals.

“She’s an unbelievable talent,” Noblet said.  “I haven’t rushed her but she’s ready for the Myer.  We’re also looking ahead because there’s a plethora of suitable races in the autumn.”

War Chant (Danzig) completed a treble for Yarradale stallions last Saturday when War God won the Guinness Hcp (1400m) at Ascot.  The Neville Parnham-trained sprinter led home a quinella for his sire with a half-length victory over War Jeune.

Earlier, Gingerbread Man had weighed in with Achernar Star at Ascot while Bradbury’s Luck mare My Girl Hayley made it three wins from her last four starts at Doomben.

On Sunday, Material Man added more black-type to his CV in the LR Northam Cup.  He benefited from a rail-hugging ride from Lucy Warwick to set up a Group 1 charge to the Railway Stakes on November 25.

A son of Yarradale sire Vital Equine, he had won the LR Prince Of Wales Stakes and LR Bunbury Cup during a break-out campaign for owners Mike and Jill MacDermott earlier this year. 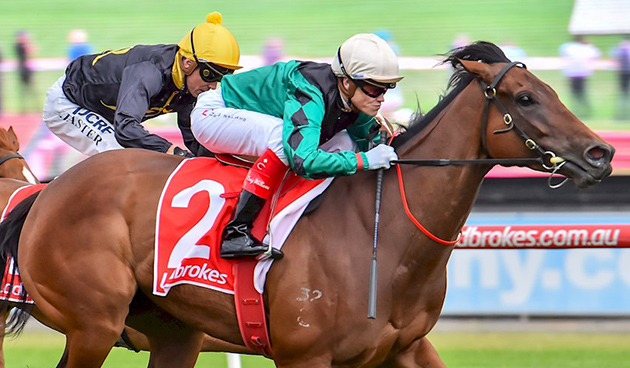