Win-win deal with Dash For Cash

Dash For Cash is enjoying a real revival this month and he kicked off Cox Plate weekend with Dodging Bullets in Race 1 at Moonee Valley on Friday night.

Dodging Bullets reeled in tearaway leader Lord Durante turning for home and lengthened to a three-length victory in the MSC Signs Hcp (2040m).  “He’s tenacious with a tremendous will to win,” Craig Williams stated.  “I kept it simple.  He was the best horse in the race and gave me a good ride.”

The Symon Wilde-trained gelding had been building up to a victory after a 6th in the LR Tontonan Stakes at Flemington, 3rd in the Bairnsdale Cup and 2nd at Caulfield during Cup week.  “It’s great to get a win on the board after being close all campaign,” Wilde said.  “And well done to the owners who have been long-time clients.”

A lightly-raced 6yo, Dodging Bullets has won 5 times in 22 starts for earnings of $363,700.  He was a $42,000 buy at the 2013 Inglis Melbourne Premier Sale for a partnership comprising Bill Whitehead, John Emerson, James Irvine, William Blackwell and John Matie.

His dam Young Love (Danzero) won at Flemington and is a sister to Happy Zero (G1 HK Queen’s Silver Jubilee Cup).  She has just been scanned in foal to Darley newcomer Frosted.

Dash For Cash has sired 6 individual winners in Victoria this month including first-starters Dominant Gene and Grey Shadow.  His Sydney sprinter Andaz can add another in the Subzero Challenge (1400m) at Flemington on the VRC Oaks card.

The first of his Scenic Lodge-bred progeny are about to get rolling in Perth.  Serpentine trainer David Harrison produced promising 2yo filly Dash For Knickers to win at the Lark Hill trials a fortnight ago. 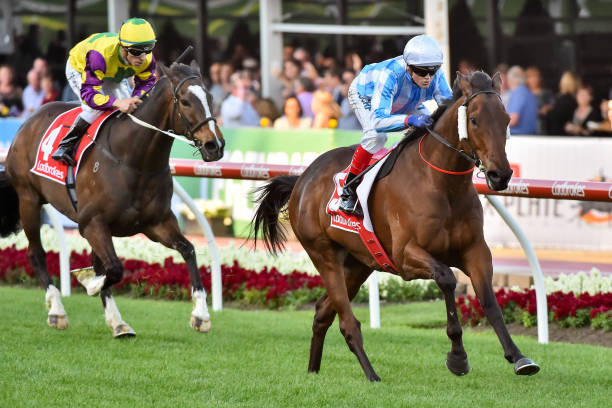