Colourful Charade is ready to deliver on the potential he showed in stakes races last season for Mungrup Stud champion Oratorio.

Last Sunday, he bounced straight to the lead from a wide gate at Bunbury and won a drawn-out duel with short-priced favourite State Attorney.  It was a strong field of 3yo maidens and the form will stand up in town for his owners Wally Mitchell and Julie Clements.

Colourful Charade was placed at Ascot in his first two starts last season and then ran another front-running placing in the RL Magic Millions 2yo Classic at Pinjarra in February.  In the fourth and final outing, he couldn’t cross from an outside gate and was always behind the eight-ball in the LR Supremacy Stakes. 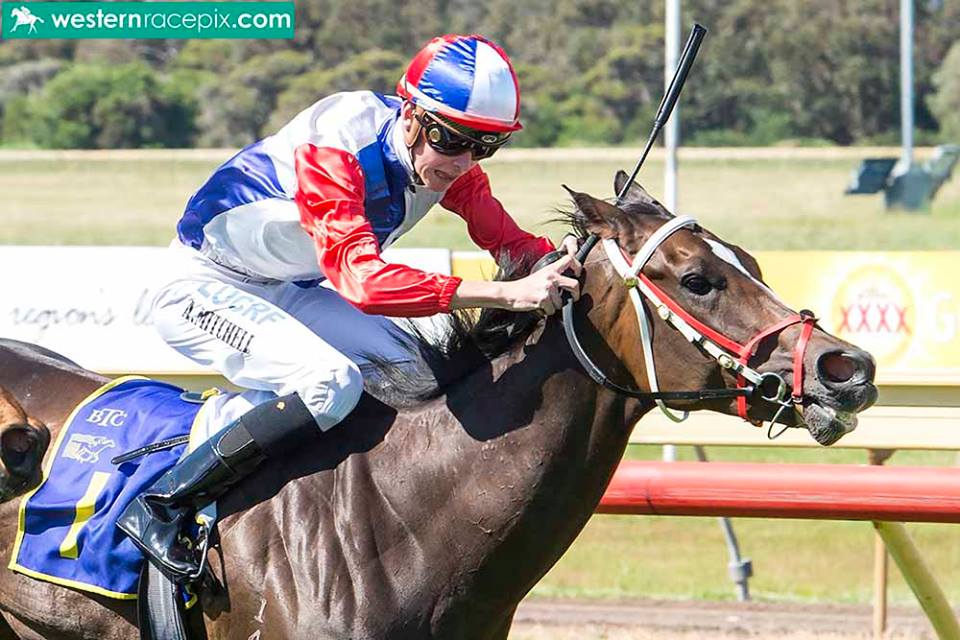 Resuming as an odds-on favourite at Belmont earlier this month, the Oratorio sprinter was baulked and stumbled when attempting an inside run in the race won by Stageman.  Apprentice Aaron Mitchell took luck out of the equation with a quick getaway at Bunbury that played to his strengths in the lead.

Woodbridge Thoroughbreds owner Ian Riley bred Colourful Charade from Agribiz.  A Key Business mare who was also best left to her own devises in front, she won three times at the provincials for David Harrison before retiring to stud in 2010.

Agribiz is better known as “Aggie” at home in Henley Brook.  “She’s very happy living with her friend Haste who is by Right Wing,” Riley said.  “They were stablemates with David and are still together.

“She has a magnificent Oratorio yearling colt being prepared at Darling View for the Magic Millions in February and she foaled an Oratorio filly last month.”

Haste started stud life a winner when Night Beat, her first foal to the races, made a successful debut at Ascot in March.  “He’s by Oratorio and so is his 2yo sister who is in work with Leon and Troy Corstens in Melbourne.  I’m still working on her name.

“Haste has a cracking Oratorio yearling filly being prepped for the February Sale at Darling View and she has another Oratorio filly on the ground.”

Riley, a former long-serving TBWA President and Treasurer, is also keen on the prospects of his Oratorio 2yo Chasing the Ace.  “She was unlucky not to run in the money at Ascot last Saturday.  It was her first start and she was held up on the turn.”

Chasing the Ace is the final foal of Deal Me Out (Final Card), the dam of multiple Melbourne nand Adelaide stakes winner Brockman’s Lass.  “The mare had to be put down not long after foaling Chasing the Ace so the filly has done it tough.  It would be a good story if she can go on and win races.”