Demerit’s Victorian sprinter Don’t Blush Baby is on a hat-trick after a dominant victories at Traralgon and Cranbourne for Aquanita trainer Robert Smerdon.

Don’t Blush Baby (4g Demerit – Pretty Pia by Tribu) had beaten some suspect maidens on November 4 before sailing home last Friday night.  “There was a question-mark about that field at Traralgon but he took the next step tonight,” stable rep Julian Hay said at Cranbourne.  “Rob has been patient and it was good to see him let down like that.”

The progressive grey galloper cost $34,000 from Taunton Vale’s consignment at the 2015 Perth Magic Millions and is raced by Price Bloodstock’s David Price and Jenny Chapman.  They have built up a very successful business buying horses for clients in Hong Kong.

“He tracked the speed and was just too good,” jockey Ryan Maloney said.  “He’s still raw and pricked his ears once we got to the front.  He didn’t really attack the line and could have won by much further.”

Don’t Blush Baby has several Hong Kong connections in his pedigree through Australian-bred gallopers Solid Contact (Happy Valley Trophy) and Ming Hoi Treasure (Lions Club Cup).  His dam Pretty Pia is a Taunton Vale homebred for studmaster Kent Johnston and she has a yearling filly by Alfred Nobel and foaled a Demerit colt in September.

Demerit weighed in with another promising winner earlier on Friday at Narrogin.  His 3yo filly Macroy saluted as an odds-on favourite in a short-course maiden and looks a likely type for Capel trainer Bruce Watkins.

Macroy is also from a Tribu mare (Tri Ammo) and that cross has a winning 85% strike-rate.

Demerit, who had Arrum Boy earn black-type when placed in the LR Placid Ark Stakes at Ascot on Saturday, stands for a $3,300 (inc gst) fee at Taunton Vale. 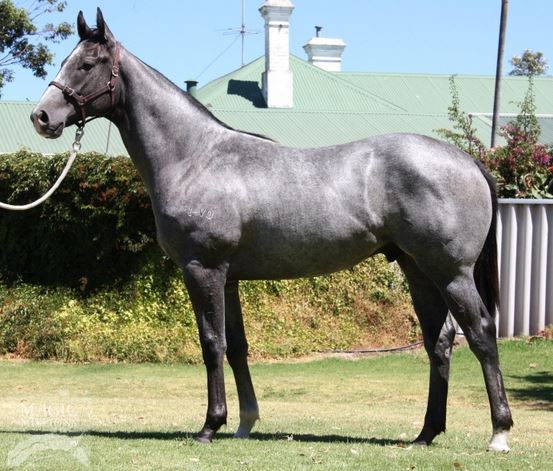