Frank Edwards considers himself a lucky man.  Lucky for buying 2017 $1 million Group One Railway Stakes winner, Great Shot, and lucky for not selling him.

Frank and his wife May, both retired anaesthetists, got into racehorse ownership around 20 years ago and have enjoyed cheering on the occasional winner, but Great Shot is definitely the pick of the bunch.

“My grandfather was a trainer and both May and I have always loved horses, but paying the education for three kids doesn’t exactly give you a lot of wiggle room, so we had to put ownership on hold for a while,” Edwards explained to Aushorse on Sunday. “We raced a couple of horses that won five races each, but certainly no black type winners among them.”

All that would change though after Team Edwards attended the 2014 Perth Magic Millions Yearling Sale for a look at what was on offer, particularly any youngsters by Great Shot’s sire, Magnus.

“Magnus had a very good filly in Perth called Magnifisio that would go on to win that year’s Group One Winterbottom Stakes, but a yearling by Magnus that went through the ring earlier in the day was out of our price range,” Edwards recalls.

“Anyway, May and I were about to head home and as we were leaving the auditorium, I heard the auctioneer selling a Magnus colt out of Satin Covers which, again, I thought would go for too much money as he was a three quarter brother to a stakes winner (Gawne) and his granddam was a Group One winner in Sydney (Satin Sand).”

Somewhat fortuitously, bidding stalled on $28,000 and Edwards decided to shoot up the finger, despite only having seen the colt for the first time when he was in the ring. Great Shot was ultimately knocked down to Edwards for $31,000.

“When I had a good look at him, I noticed he had these swollen fetlocks – from Sesamoiditis – and when I spoke to Scenic Lodge, who sold the colt, they told me the swelling would go down in a couple of days and they were spot on.”

Edwards then had to decide where to send his recent acquisition and phoned jockey, Craig Staples, who had ridden a couple of horses for him previously. Staples supplied three names, including Warren Radford.

“I got along really well with Warren, but before Great Shot raced, Warren had decided to step back and let his son, Rhys, take over the operation,” Edwards reveals. “Warren said he’d still be involved and they gave me the option to move the horse to another stable, but I was happy enough to leave him with Rhys.”

Rhys Radford, who trains a small team at Oakford, some 30 minutes from Perth’s Ascot racecourse, remembers it well: “Frank and May actually placed three horses with the stable … two of them I could beat in a race, while the other was Great Shot,” Radford says with a laugh.

First stepping out as a December 3YO, Great Shot would win or place at his first eight outings, including a four length romp in last year’s Listed Belmont Guineas. A black type first for Great Shot, a first for his owners and a first for his trainer.

Not surprisingly, given the nature of the victory, Edwards was soon fielding seven figure offers from Hong Kong and was faced with the age old dilemma … the money or the box?

“I spoke to Warren (Radford) who said I should probably take it (the offer) and pay off the mortgage, while I also called Craig (Staples), who asked me: ‘do you need the money? The million dollars would allow you to buy more horses which means more rides for me, but what are the chances of getting another one like Great Shot?’

Wise move. Since the Belmont Guineas, Great Shot has won three other stakes races and placed in nine black type events for a prizemoney tally of $1,204,785.

Despite successive stakes placings in October and getting nabbed right on the wire after leading throughout in the Group Two Lee Steere Stakes over 1400m at Ascot just two weeks earlier, Great Shot was sent out a $31 pick for the 1600m Railway … much to the dismay of his trainer.

“I was really surprised they had him at that price. I thought $15 at worst,” a bemused Radford points out. “He always gives his best this horse … you can never write him off. He’s had a 5-time Group One winner in Black Heart Bart bearing down on him, as was Tom Melbourne, but he just hung in there and was too good for them on the day.

“We’ll head to the Group One Magic Millions Kingston Town Classic (over 1800m) at Ascot on 9 December and while he’s likely to be up against Black Heart Bart again and on level weights, he’s got to be a real chance.

“This is what you dream of … the Railway Stakes is my favourite was always the race I wanted to win in Western Australia, but a Kingston Town wouldn’t go astray either!”

While the Edwards’ and the Radfords had no conflict of interest as to who to cheer home in the closing stages of the Railway, Scenic Lodge’s Jeremy Smith had a bit ‘each way’ given that the leading West Australian nursery bred both Great Shot and Black Heart Bart.

“Don’t ask me to pick,” Smith jokes. “Black Heart Bart is by our resident stallion, Blackfriars, but Great Shot becomes the sixth individual Group One winner from the farm after Bart, Scenic Blast, Playing God, Coniston Bluebird and Gilded Venom.”

Scenic Lodge had purchased Satin Covers, in foal to Magnus, for $26,000 from the 2012 Magic Millions National Broodmare Sale, and Smith reveals that Great Shot was to be the mare’s final foal.

“Very disappointing … she had quite a few problems and no matter what we threw at her, she never produced another foal and was pensioned last year,” Smith adds. “Fortunately, we have a More Than Ready mare from Satin Covers, Sateen, who is on farm and has a lovely Blackfriars colt and was covered by our stallion, Snippetson, this spring.

“Who knows … we might just get another Shot yet!” 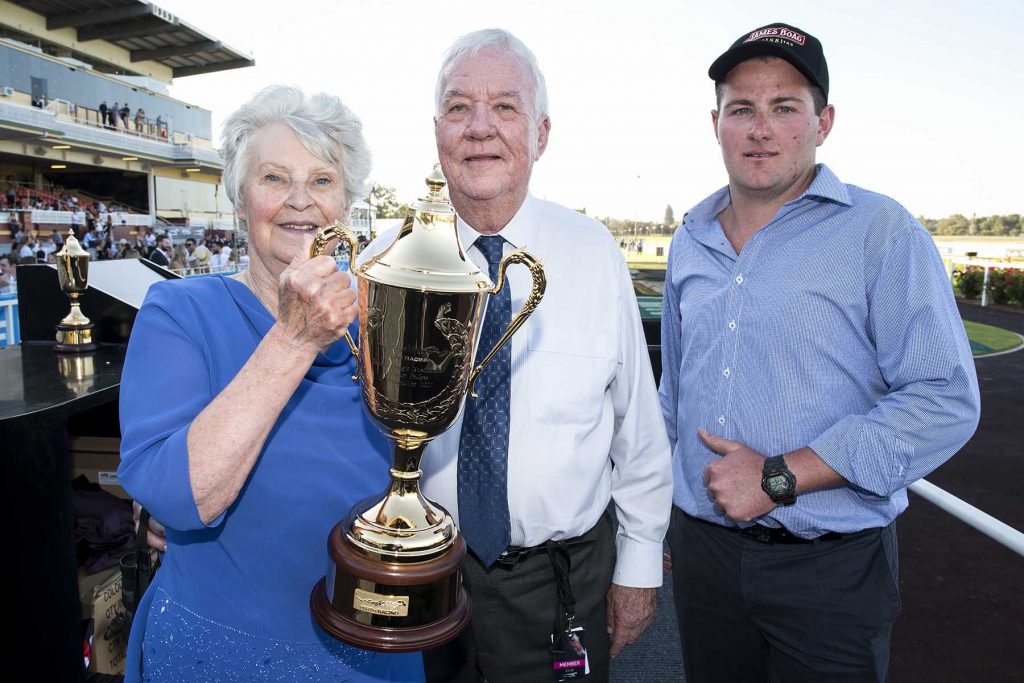