Mokastar completed an international treble for Yarradale Stud with an all-the-way victory in Singapore on Friday night.

Trained by Ricardo Le Grange for Tmen Stable owner Emily Hwang, he had run three placings in strong juvenile company before a front-running breakthrough at Kranji in August.  He set the pace again on Friday evening and then waved good-bye to the bystanders for a two-length win.

Yarradale owner Ron Sayers bought Saddler’s Silk at the 2014 Inglis Easter Broodmare Sale in foal to Poet’s Voice.  After delivering Mokastar, she was covered by War Chant to produce a filly that was purchased by Dan Morton for $40,000 at the Yarradale Stud Sale in May.

STALLWALKIN’ DUDE has been a tremendous advertisement for Yarradale Stud sire City Place (USA) earning over $1.68 million in a career spanning 59 starts.

The veteran sprinter won his 20th race in the G3 Fall Highweight Hcp (1200m) at Aqueduct on Thursday.  Shouldering 61kg in the Thanksgiving feature, he powered through a split in the straight to win going away.

He was runner-up in the 2016 Fall Highweight and went into this year’s edition on the back of placings in the G1 Vosburgh and G3 Bold Ruler.  “They have been some of his premier performances,” part-owner and trainer David Jacobson said.  “He’s as good, if not better, than he’s ever been!”

DUCK FEET had won a Pinjarra maiden with Willie Pike aboard on Anzac Day and he responded in kind for apprentice Mollie Clark on Wednesday.

“He’s a talent but was still fat inside after Bunbury last week so we backed-up and it worked out,” trainer Brett Pope explained.  “He was fit and hard today and hit the line at the end of 1500m.  I think he will get out to 2000m.”

Duck Feet (War Chant) is a homebred for Geisel Park owner Eddie Rigg and is the final foal of USA-bred mare Adalia (Silver Charm).  Rigg was part of the syndicate that imported War Chant to Yarradale in 2011.

War Chant can strike twice at Group 1 level in this year’s TABtouch Masters at Ascot.  Variation is a $10 chance for the Railway Stakes this weekend and Dainty Tess is a $21 pre-post hope for the Winterbottom Stakes next Saturday. 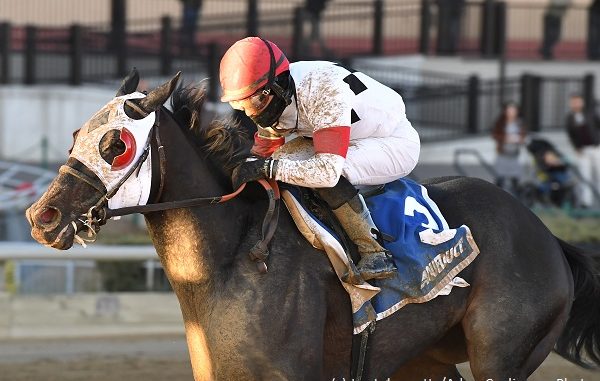