Home Blast from the past at Ascot

Blast from the past at Ascot

Saturday’s Group 1 Winterbottom Stakes meeting began with a blast from the past when Touch Of Silver saluted in the TABTouch Hcp (1600m).

The Saxon gelding was bred by Heytesbury Stud and his dam Vintage Silver (Marooned) is a half-sister to Heytesbury’s 1989 Winterbottom winner Carry A Smile.

Touch Of Silver settled at the tail off a frenetic pace before circling the field to score by three-quarters of a length.  It was his first win since putting together a sequence of four in a row at Ascot earlier this year and he appreciated the drop back from Group 3 company to a Benchmark 66.

“I thought he was getting close to the mark,” trainer Adam Durrant said.  “He’s finally dropped his winter coat and is looking for further ground now.

Heytesbury sold Touch Of Silver for $60,000 at the 2014 Perth Magic Millions to Durrant and part-owner Neville Hall.  Saturday’s prizemoney sent his earnings to $165,075 which includes Westspeed bonuses of $25,000.

Touch Of Silver is a grey, just like Carry A Smile who won 12 of his 17 starts for Heytesbury owner Robert Holmes a Court before retiring to his Keysbrook property in 1990.

Carry A Smile was one of 33 stakes winners by Heytesbury legend Haulpak and carved out a successful stud career of his own siring 174 winners of 536 races headed by G1 WA Derby winner Capricious Lass. 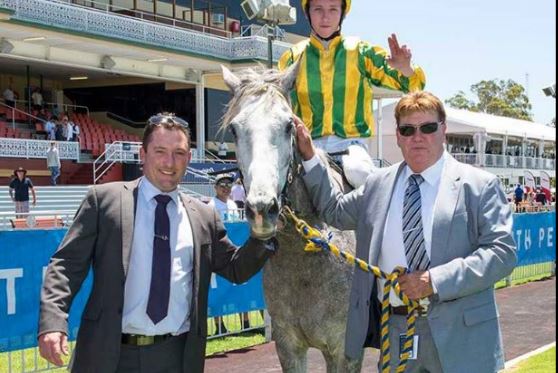