Wilt the Stilt has scored a remarkable win at Bendigo within a week of emerging from quarantine.

“We’ve been in lockdown with strangles at Kyneton so it was a top performance,” trainer George Osbourne revealed following the Bet 365 Maiden Plate (1300m).  “He was fresh and Chris (Symons) let him go forward.  The plan was to settle back in the field but Chris said there was no point fighting him.”

Osborne also tinkered with his gear – adding blinkers and a tongue-tie – to bring out the best in the Globetrotter gelding on Wednesday.

Wilt the Stilt tracked Superfactor before accelerating to a winning leader at the top of the straight.  “He wanted to be up there and was in neutral behind the leader,” Symons explained.  “I could hear them coming at the finish but he really tackled the line.

“He’s only going to get better with that win under the belt.  It will help his confidence and he can keep going forward now.”

Wilt the Stilt is a younger half-brother to Sagapuss (Real Saga) who won twice at Morphettville for Phillip Stokes.  Their dam Pasiphae (Helissio) is a half-sister to G1 Stradbroke Hcp winner Rouslan.

Globetrotter (Street Cry) initially stood in Victoria before transferring to Western Australia this year.  South-west breeders Robbie and Colin Smith stand him at Forrest Beach Estate for a $2,500 fee.  For further details, Robbie Smith can be contacted on 0428 521 166 / rgnsmith1960@gmail.com 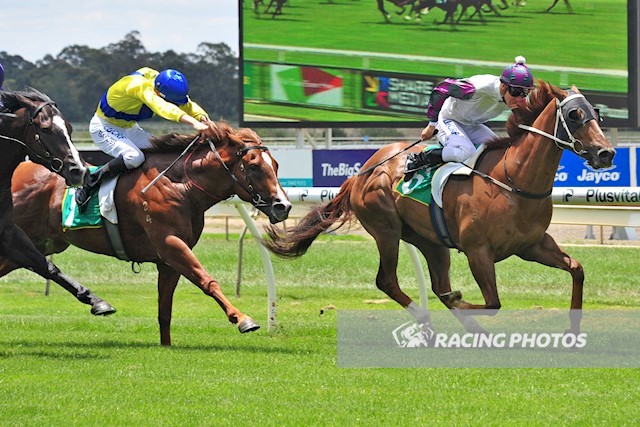