Victorian trainer Symon Wilde has more silverware lined up for Dodging Bullets in the $100,000 Werribee Cup (2000m) this Sunday.

The consistent son of Scenic Lodge sire Dash For Cash won the $100,000 Kyneton Cup last month and Wilde warmed up for his next assignment with another Dash For Cash winner at Terang on Monday.

His grey mare Dash Of Pash scored by two lengths first-up giving jockey Andrew Mallyon a trouble-free winning fee in the Terang Co-Op Maiden Plate (1200m).  She was resuming after a fast-finishing fourth on debut at Hamilton in June.

“She gave me a good feel when I came down to ride her work last week,” Mallyon said.  “She showed a bit of toe and I was confident when she jumped and sat outside the leader today.

“She put her head on her chest and went to sleep.  I gave her a kick in the straight and she put them away.  She’s not fully furnished so will definitely keep progressing.”

A homebred for Wayne Johnstone, she is by Dash For Cash from La Reef (North Reef) who won three restricted sprints in the western districts.  Her half-sister La Mookta claimed a Terang maiden before graduating to city wins at Flemington (3) and Caulfield.  She was also stakes placed at Flemington and at Warrnambool in a Wangoom Hcp.

“Dash Of Pash has been given plenty of time to mature – she’s in great order,” Wilde explained.  “And it’s a thrill to win here for Wayne.  He’s president of the Terang Racing Club.” 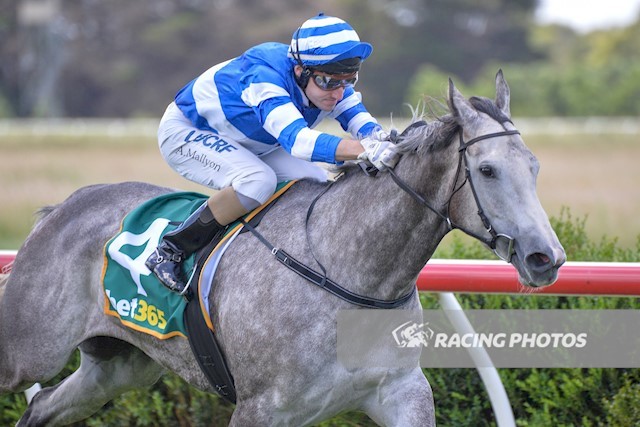