Kiwi sprinter Our Dynamite is beginning to live up to the potential he showed last season for trainer Wayne Marshment and former Perth-based owner-breeder Kevin Mahoney.

The son of Alfred Nobel (Ire) camped on the speed and then kicked clear for a convincing win in the Manely Horse Hcp (1200m) at Wanganui on Thursday.  Apprentice Madan Singh had the field covered a long way from home but did earn his fee keeping the lightly-raced gelding on a direct course in the straight.

Our Dynamite had won by 5 lengths on debut at Trentham last April.  The ease of that victory had agents calling on behalf of off-shore clients, however, those offers fell on deaf ears and he returned to racing in the South Island in December.

Standing no more than 15 hands, the pocket-rocket raced ungenerously at Stratford on New Year’s Eve and was still a handful at Wanganui yesterday.

Our Dynamite’s dam Gold Park (Bletchley Park) is a sister to Singapore star Superb Effect (Bletchley Park) and a half-sister to Perth Group 3 winner Finito (Palace Reign).  She was exported to New Zealand but died after being covered by Dalghar (Fr) at Brighthill Farm in 2015.

Alfred Nobel stands at Lynward Park in Bullsbrook and has a sale-high 29 lots catalogued for the Perth Magic Millions yearling sale in February. 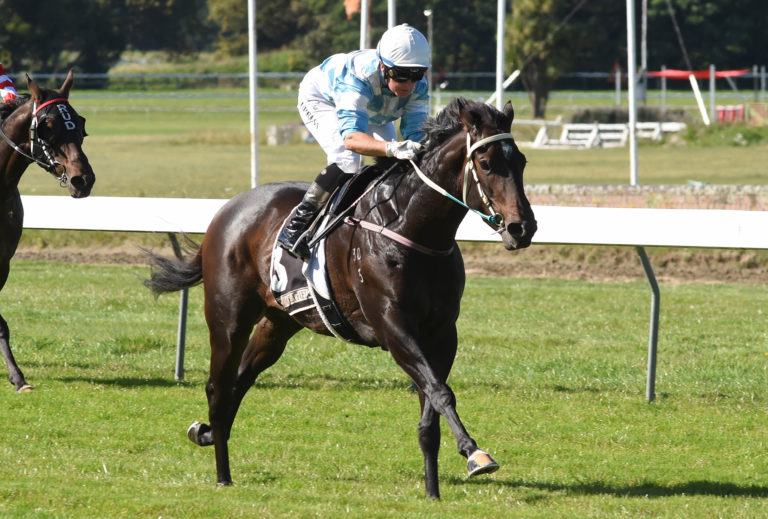