Home A1 yearlings from Alwyn Park

A1 yearlings from Alwyn Park

The yearling preparation at Alwyn Park is in full swing ahead of the 2018 Perth Magic Millions Yearling sale. Stud owner John Andrew comments on his Top 6.

The horses are prepared on a diet of Pegasus Studmaster and EquiJewel and are housed in Alwyn Park’s unique quad box barn to keep them in peak physical condition and promote healthy mindset.

Trade Fair / Time Peggy filly
This is the mare’s first foal. Her dam is a half sister to a mare called Rose of Choice, who won a stakes race and is now a broodmare over east. Rose of Choice’s first foal by Hinchinbrook was sold by Magic Millions this year for $450,000. She has a lovely big rangy walk and has done very well during the prep.

War Chant / Western Sunset filly
She is a half sister to Western Fever, who won the Magic Millions 2YO Classic a couple of years ago. And it’s a very good family developed by Bob Peters. The mare is actually a half sister to Perfect Reflection. She is not an overly big filly but is very strong and neatly put together.

Universal Ruler / Bellydance filly
Bellydance has been a very good mare for us. She is the dam of 4 foals to race, for 3 winners. Her filly sold at last year’s sale for $84,000 and she is actually racing at the moment and showing promise.

Maschino / Wild Park filly
This filly is the only Maschino in the sale. The mare is the dam of 5 foals to race, for 3 winners. I had Wild Park for many years and she was a great mare, but unfortunately died this season. So this will be the last filly from the mare.

Blackfriars / Amazing Tale colt
He’s a really nice colt, a little less mature as he is an end of October foal, but he has a really lovely athletic frame and a great swinging walk. The mare has had 3 to race, for 3 winners, so has an excellent record. This colt’s half-sister Detente won at Pinjarra a couple of weeks ago and has had 4 wins in her career so far.

Alfred Nobel / Disco Miss filly
The mare has had 3 foals to race for 2 winners. This is quite a good imported family line. Her half-sister, by Maschino, from last year’s yearling crop, recently had 2 trials for a 3rd and a win and then had 1 race start, where she ran 6th, beaten by 2 lengths.

Our horses grow so well on Studmaster out in the paddock, that they come in well advanced in condition and bone. This means we can keep the prep period a bit shorter, making it easier on the horses and the staff. Our prep is about putting the polish and handling into them so that they are in peak condition, and behave their best at the sales. 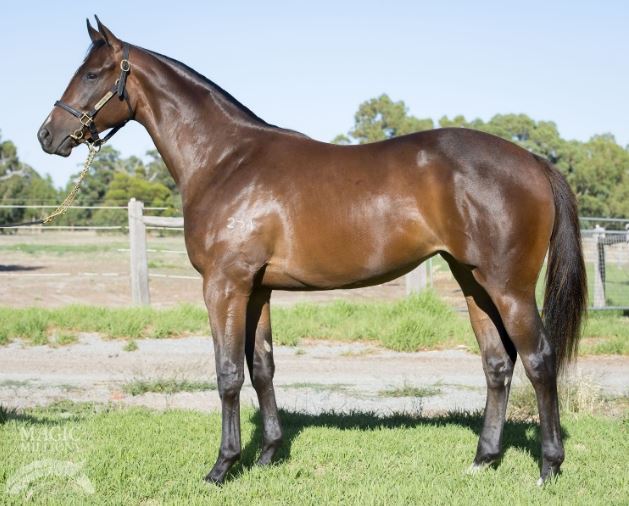