Seannie was labelled something special by race-caller Terry Bailey at Moonee Valley last Friday night and he was spot on after the WA-bred filly cartwheeled into the Ranvet Summer Sprint (1200m) with an amazing finish.

The Sebring 3yo is a homebred for Brett Fogarty’s Cape Falls Thoroughbreds in Wilyabrup.

“Seannie is flying down the outside and will beat ‘em all,” Bailey cried.  “She marvellous – from stone motherless last.  That was special.”

Trainers Trent Busuttin & Natalie Young were equally impressed with the filly who had won the LR Supremacy Stakes at Ascot before transferring to Cranbourne last year.  “Seannie comes from last,” Busuttin Racing exclaimed.  “Great return and looks in for a very nice prep.”

Fogarty bought her dam Uncanny Choice (Choisir) as a foal for $52,500 at the 2008 Magic Millions National Sale.  She didn’t race, however, her half-sister Dubleanny helped with stakes wins in Melbourne and Adelaide.

Another Cape Falls filly with a bright future in Melbourne is Seeking Alpha (Pierro).  Busuttin gave her a break after a brilliant debut at Cranbourne in December.  Her dam Paris Petard (Mujahid) had won the 2006 WA Sires’ Produce Stakes, Belgravia Stakes and Gimcrack Stakes. 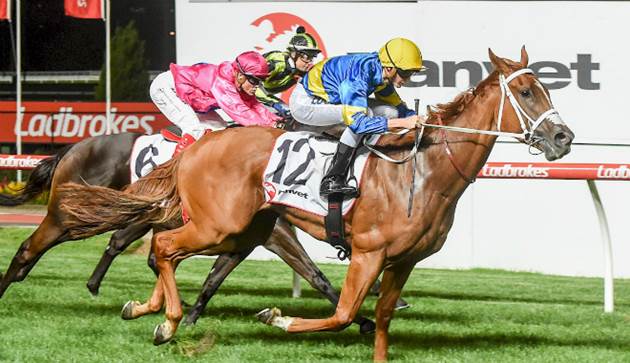