Amelia Park is looking forward to showcasing its quality draft of 6 yearlings at the 2018 Perth Magic Millions Yearling sale.  Stud manager Sarah Brown gives her comments on each horse’s progress.

The horses are prepared on a diet of Pegasus Studmaster and EquiJewel, plus a carefully planned exercise regime that includes hand walking and paddock time to keep the horses mentally fresh and happy.

Lot 27 Magnus / Ausmaid filly
This filly has impressed every step of the way. She has always carried such a beautiful shape and has developed into a big strong girl. She is very forward and has handled everything we have thrown at her like a professional. She is by the ever consistent sire Magnus who has made his mark on WA racing with the likes of Magnifisio and recent Railway Stakes winner Great Shot. She is also the half sister to in-form VOBIS Gold Carat winner Bel Sonic. She is a strong and well developed type that looks to have early speed, but also has the scope to carry her through the age groups.

Lot 59 Witten Tycoon / Elle Labelle filly
This filly is by the seriously hot sire Written Tycoon. He has produced Golden Slipper winner Capitalist and was leading Australian 2YO Sire in 2015/16. This filly’s build and looks match his record perfectly. She is strong and well developed and looks to have the perfect package to produce speed and run early. She is tough and has taken all the work in her stride without lifting her head from the feed bin.

Lot 81 Redoute’s Choice / Hifalutin colt
WA buyers have never had the opportunity to purchase a colt by sire of sires Redoute’s Choice in Perth.  Along with his his height, this colt is a spitting image of his father. He is an early running type with incredible strength and maturity. His dam Hifalutin was a successful WA mare running 2nd in a G3 Champion Fillies. His strength matches his attitude, he is tough and has that all important swagger in his step that all good colts need.

Lot 107 Hinchinbrook/ Morinda colt
This colt is by up-and-coming sire Hinchinbrook who has produced successful WA filly Whispering Brook. He is also a full brother to 2yo winner Rubia Miss and Floki who recently won his first start by an eye-catching 10 lengths. He is a big strong boy with plenty of scope. He is an incredible mover, producing a walk in keeping with that of his grandsire’s (Fastnet Rock) progeny. His long flowing stride means he covers the ground naturally and effortlessly, this along with his laid back nature has made him a simple horse to prepare for sales.

Lot 126 Smart Missile / Refit colt
This colt is by Smart Missile who has G3 WATC Sires’ Produce winner Debellatio and more recently Missile Launch. He is out of an Encosta de Lago mare who has produced 8 time and listed winner Cavaloce.  He is big and strong with plenty of bone and scope.  He has had a big frame to fill throughout preparation and has exceeded expectations. From his mature mindset, to his physical development throughout prep, he has impressed me every step of the way. He flourishes on work and feed and been a true gentleman to handle.

Lot 146 Sizzling / Streghetta colt
This colt is by new sire Sizzling, who was a force to be reckoned with at two. He is closely related to Group winners Lucy Diva, Gina Lollawitcha and Spirit of Westbury.  He has such a naturally beautiful shape and is perfectly correct. He is an athletic type with lovely long legs and plenty of scope. Yearling preparation has really seen him develop and mature into his frame. He is a hard worker and so naturally athletic he hasn’t needed to be pushed throughout prep. He has such an inquisitive and cheeky nature that he has quickly become a stable favourite with his antics. He will no doubt love racing life as he thrives on having a job to put his mind to.

Overall I could not be happier with how our draft has developed during prep. I can’t thank Michelle from Milne enough for all her help with the diets. 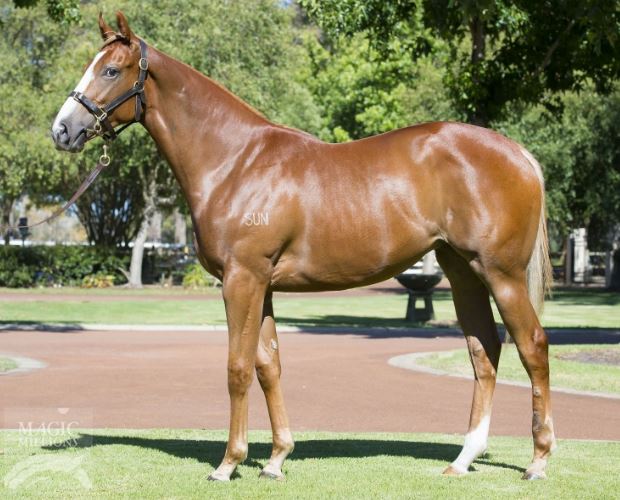