Charger was bred and sold by Mungrup Stud for $50,000 at the 2016 Perth Magic Millions and he’s already earned the equivalent of AUD 164,090 for owners Constance Cheng and Julia Ho.

Leading trainer Theo Kieser was confident Charger would return to the form that saw him earn an $80,000 bonus for accumulating most prizemoney during the 2017 Aushorse Golden Horse 2YO Series.  “He’s been good from Day 1 and I expected him to make his presence felt today. He was strong to the line and will now go for the 3YO Challenge.”

“The first-up run brought him on and he was more relaxed today,” winning jockey Nooresh Juglall said. “It took him a while to unwind but he let down very nicely for a solid win.”

Charger (Dick Turpin) is a half-brother to LR Scenic Blast Stakes winner Dueton and Mungrup bred their dam Californium (Flying Spur) back to I’m All The Talk in September.

Mungrup Stud has 31 lots catalogued for the Perth Magic Millions with all bar one by Playing God (16) and Oratorio (14). Odd man out is the Red Hot Choice colt (Lot 169) related to recent LR Miss Andretti Stakes winner Volkoff.

Charger heads a high-tide of WA graduates making a mark in Singapore. They’re featured in the latest edition of Sunspeed Magazine here. 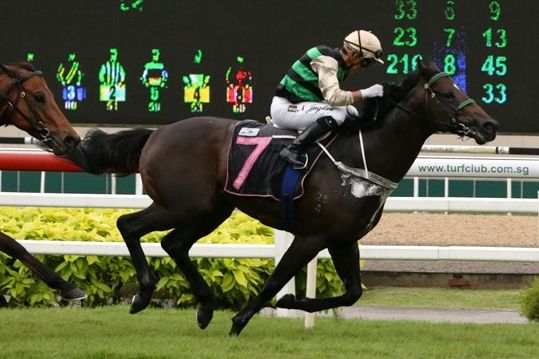