Yarradale Stud experienced a week of mixed emotions that finished on a high with Valour Road at Pinjarra on Saturday.

Yarradale owner Ron Sayers sold Valour Road for $60,000 at the 2017 Perth Magic Millions and the colt repaid that many times over in the Magic Millions WA 2YO Classic (1200m).  Settling in front on debut, he reprised some impressive trial form in a race that carried black-type status and $250,000 in prizemoney.

“It’s a great thrill.  He had shown us every sign that he could win,” jockey Aaron Mitchell said.  “I’m just so relieved we were able to get the job done.”

Valour Road is trained by Simon Miller for a large syndicate, including Sayers, that celebrated in style at Pinjarra’s stand-alone meeting.  He is from the second and final crop of Frost Giant (USA) who joined the Gidgegannup roster for two seasons in 2013-14.

“City Place was happy and healthy on Monday night and had eaten up his dinner and hay so it was a bit of shock to find him dead in his paddock the next morning,” Yarradale manager Bernie Hamill explained.  “We are still waiting on the results from the autopsy…it was nothing obvious like a snake bite or colic.”

On a brighter note, Hamill recalled the back-and-forth background of Valour Road.  “He’s the first foal from Melba Avenue who Ron bought as a weanling at the 2010 Darley Reduction Sale in Sydney.  Ron has a liking for families and he had purchased her mother La Melba earlier that year at the Inglis Easter Mare Sale.

“We sold Melba Avenue to Keith Biggs as a yearling but, of course, Ron kept a share.  She won a race and Ron bought her back off Keith and put her to stud.  We had lost La Melba by then so she’s our link to that family.”

La Melba was a half-sister to Group 1 sprinter Flavour and, besides Melba Avenue, she had also foaled multiple stakes winner Raspberries.

City Place (Storm Cat) has 6 yearlings from his second crop at the Perth Magic Millions.  His filly from Great Tradition (Lot 218) is a half-sister to Luke Oliver’s veteran mare Khutulun who won the Big Screen Company Hcp at Caulfield on Saturday.

Yarradale Stud yearlings will be available for viewing at Belmont Park from 9am this Friday, February 16.  There have been two late withdrawals – Lot 117 (War Chant x Passion Cantata colt) and Lot 215 (Gingerbread Man x Galena Manor filly).  They will be re-offered at the Yarradale Stud yearling sale in May. 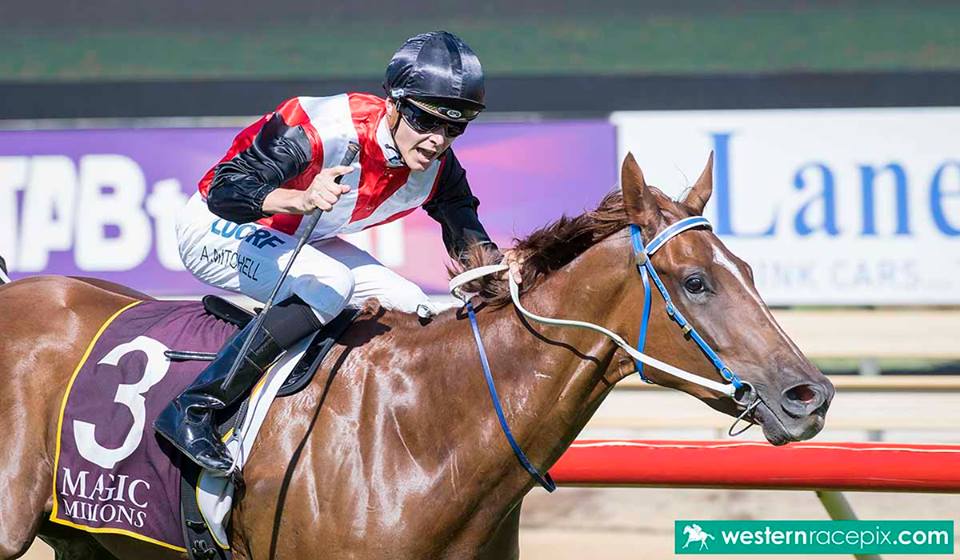