Hvasstan had his first yearling parade at public auction during the Magic Millions March Sale on Monday.

But the incoming Rivercrest Park sire didn’t get any favours at the Gold Coast – his colt from Take A Guess (Last Tycoon) was the final lot on Day 1.  Sky Channel host Michael Maxworthy stayed the distance and got him below the odds for $26,000.

Entered by Clear Mountain Fairview, he is one of 12 live foals from Hvasstan’s first crop and was rated an “outstanding” colt by vendor Bob Frappell.

Maxworthy agreed.  “I’m pleased to be the new owner – Hvasstan can produce a good type!”

Hvasstan (Fastnet Rock) won a Group 3 at Caulfield and, at his peak, was rated higher than star stablemate Mourinho by trainer Peter Gelagotis.

Rivercrest Park’s Steve Hoare will stand Hvasstan for $1,100 this year.  Associate stallion Due Sasso, who sired Red Ora to a Listed victory in the Bunbury Stakes on Wednesday, is available for a $550 service fee. 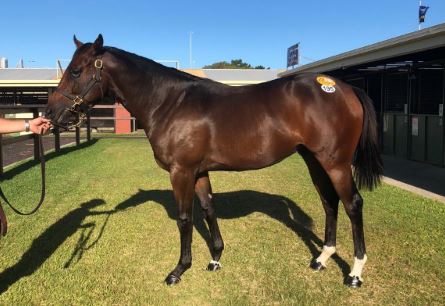