Sunspeed colt Paquirri has delivered more Group success for Dawson Stud and the Perth Magic Millions on the first day of The Championships at Randwick.

The Gary Moore-trained 2yo picked the perfect stage to break his maiden in the G3 Kindergarten Stakes (1100m).  He had been placed in the Max Lees Classic at Newcastle and at the Gold Coast behind top filly Sunlight in the lead-up to the $2 million Magic Millions Classic.

Paquirri’s only below-par performance was a last-start failure in the G2 Todman Stakes and jockey Andrew Adkins said there were excuses.  “He reared when the gates opened and we got back so it’s a nice turnaround.  He really showed a bit of fight today.  Blinkers have switched him on.”

Paquirri (2c I Am Invincible – Miss Solis by Oratorio) was knocked down for $265,000 at the 2017 Perth Magic Millions and Dawson Stud’s Graham Daws kept a share in the colt.  His dam was a Listed winner of the Supremacy Stakes and Belgravia Stakes in 2012.

“He didn’t have much luck in his first few races and was first emergency for the Magic Millions Classic,” Moore said.  “He does possess plenty of speed and has got a big motor.  He really is a nice horse.

“I worked him in blinkers at Rosehill last week and he went sensational.  He’s shown that of a morning but we haven’t been able to get it out of him.  He got to the line today and now we will step him up in class for Brisbane.

“He was the pick of the yearlings at the Perth Magic Millions and was a very good buy.  I really wanted to get a top-class juvenile and this could be the bloke to do it for me.” 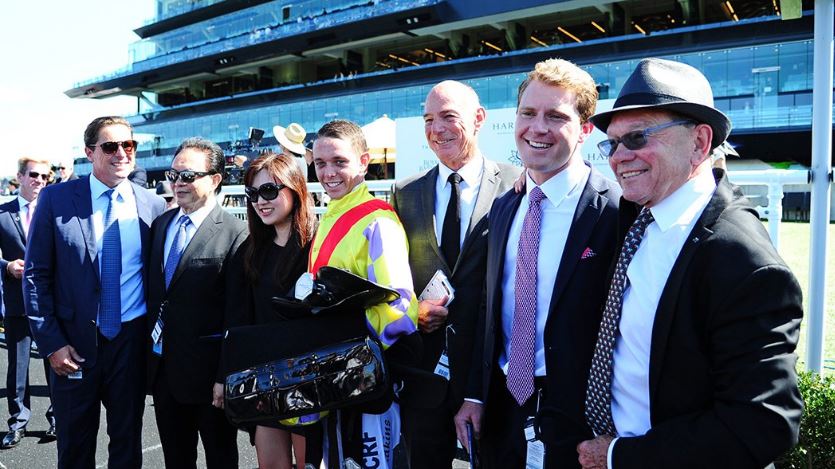 PAQUIRRI
Graham Daws (centre) in the winner’s circle at Randwick