Fabergino has returned to racing with a sizzling first-up victory in the James Boags Premium Hcp (1100m) at Ascot.

The grey flash had blitzed an Ascot nursery on debut exactly a year ago and wasn’t seen again until a similar front-running victory in November.  She was off the scene for another six months before completing a comeback hat-trick on Saturday.

“She’s a filly with untapped ability and we will only give her another light campaign,” trainer Tiarnna Robertson said.  “She’s always been blistering over 1000m and today showed she will get out to 1200m.

“She’s improving but is still a work in progress.”

Fabergino is a first-crop daughter of Encosta de Lago sire Maschino and is raced by a partnership that includes her breeder Jim Anderson.  He raced Maschino and bought her dam Miss Razyana (Danzero) for $36,000 at the 2013 Magic Millions National Sale.

She travelled sweetly for Peter Knuckey on Saturday and kicked clear when asked to sprint in the straight.  He eased her down to win by two lengths from Stageman (Written Tycoon) and Alpha Sky (Patronize).

The winning time of 63.50s is within a second of the long-standing 1100m track record held by Moonlight Drive.  “She didn’t trial so I wanted to contain her speed in the middle stages,” Knuckey explained.  “But’s she’s like lightning and it’s so good to win for Jim.”

Maschino retired to Alwyn Park after a career topped by a Group 3 victory in the R J Peters Stakes (1500m).  His second-crop includes the Bernie Miller-trained 2yo Cup Night who was placed in the LR Perth Stakes behind Chix Pic and Platoon in March.

Fabergino is the first WA foal from Miss Razyana who won at Canterbury for Gai Waterhouse and is related to G1 Coolmore Classic winner Camino Rose.  The 13 year-old mare has more by Maschino in the pipeline with a 2yo named Rush’n Machine, a colt foaled in August and she’s back in foal at Alwyn Park. 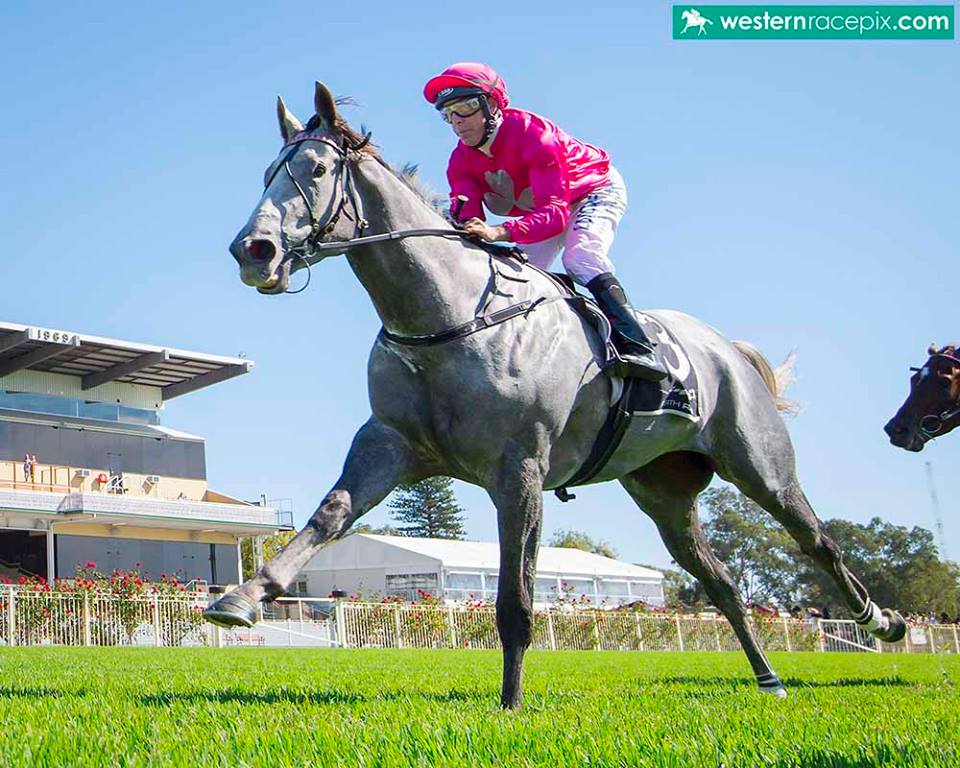