Bradbury’s Luck sired the winners of 10 domestic races in the month before Eye Guy added an international dimension in Kranji last Saturday.

The Yarradale Stud resident is edging towards a career tally of 700 wins of which 34, including LR Moonbeam Vase winner Cash Luck, have been in Singapore.

Eye Guy broke through in the Stepitup Stakes (1200m) after an encouraging third on debut for trainer Michael Clements. Striding straight to the lead, the 3yo gelding was inclined to over-race in the initial stages but jockey Alysha Collett kept a lid on his exuberance to keep a length in reserve when challenged in the straight.

“I’m thrilled to get my first winner in Singapore,” Collett said. “He’s got a free-riding action but was on the wrong leg and ran out in the straight. Fortunately, he had enough left in the tank to win.”

Eye Guy was bred and sold for $15,000 by Kim Loxton’s Ferrari Racing & Breeding at the 2016 Perth Magic Millions. He had defeated Paddy’s Shadow in a Belmont trial before that galloper came out and won his first two starts at Ascot last December.

Exported to Singapore in January, he will be winning again for owner Joe Singh who also raced Yarradale Stud stallion Gingerbread Man. “It was a beautiful ride by Alysha and he hit the line very well,” Clements said. “The horse was pretty green but he’s improved from that first run to beat a strong field today.” 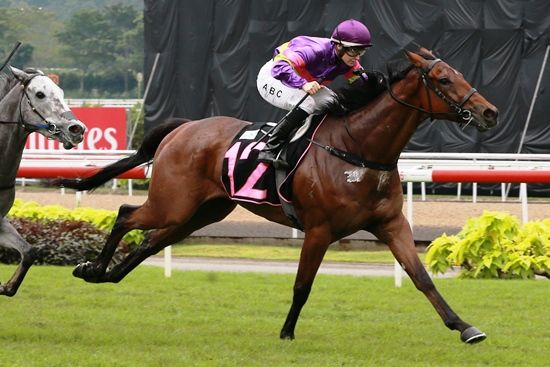