Oratorio sprinter Rafaello is back on deck for another black-type campaign in Singapore after a stirring victory at Kranji.

With Glen Boss aboard for the first time, Rafaello settled nicely on the bridle behind race-leader White Hunter and then pulled clear to score by three-quarters of a length on Sunday. It was his 8th win from 29 starts for prizemoney of AUD 551,300.

Rafaello had only faced the starter once in 12 months when resuming last month. Among his targets this prep will be the G3 Garden City Trophy (1200m), a race he won in 2016.

“I knew they weren’t going to run him down at the top of the straight,” trainer Ricardo Le Grange declared. “Rafaello is the stable soldier. He’s had chips removed from both fetlocks and I owe a big thank-you to the owners Fred and Manuela Crabbia for their patience.”

Mungrup Stud champion Oratorio sired him from Born Bold (Exceed And Excel) and he sold for $47,500 out of the Yarradale Stud draft at the 2014 Perth Magic Millions. Her latest foal is a Gingerbread Man yearling colt with Dan Morton.

Boss replaced suspended Nooresh Juglall and acknowledged any jockey could have steered Rafaello home on Sunday. “He’s a lovely ride. He is a very fit racehorse and he enjoyed having a bunny to chase.”

Oratorio has sired the winners of 35 races in Singapore and Sunday’s result following a running double at Ascot on Saturday. He will stand for an $11,000 (inc gst) fee this year. 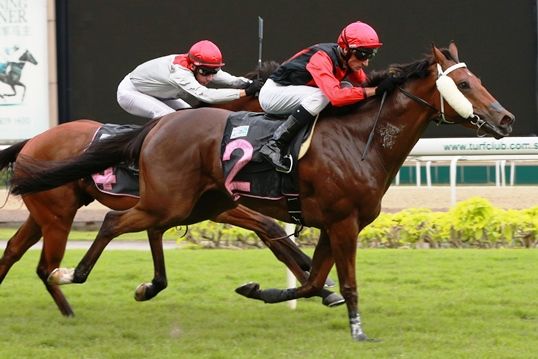