Home Demerit on high-alert at Belmont

Demerit on high-alert at Belmont

You didn’t have to be a Rhodes Scholar to double up with Demerit at Belmont last Saturday.

Demerit sent the Hyperion Stakes meeting into high-alert with his rising stars Special Reward and Danny George.  The running double only paid $5.80 but they banked over $155,000 to propel Demerit to a career-high fourth spot on the WA sires’ premiership behind Blackfriars, Snippetson and War Chant.

With just four crops racing, the Taunton Vale resident has earnings over $1.85 million.  He commenced the 2yo season with flying filly Agent Pippa and is drawing the curtain with his untapped 2yo son Special Reward.

The Simon Miller-trained youngster has added another dimension to our top-rated juveniles of 2017-18.  The depth is the equal of any crop in recent memory.

“He’s exciting and we haven’t got to the bottom of him yet,” Miller said after another outstanding victory in the Quayclean 2YO Plate (1300m).  “We’ve thrown a fair bit at him and he’s responded like a very good horse.” 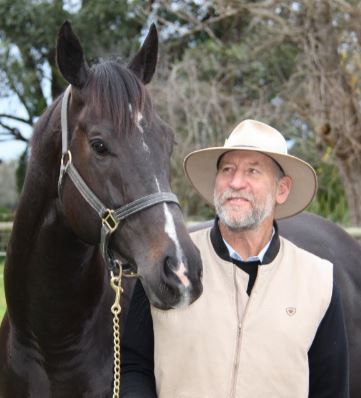 Special Reward is on a fast-track towards the $500,000 WA Guineas in November.  “He’s a genuine Guineas horse and he’s qualified now,” Miller added.  “He’s trained on really well and we might go one more time before a spell.

“There’s a 1400m Westspeed race in a fortnight worth another $70,000.  It’s tempting but we might end up sending him straight out.”

Danny George will keep chasing more Westspeed 3yo money for Pinjarra trainer Brett Pope.  “He’s a quality horse and it’s fun winning these bonuses,” Pope said.  “He was racing first-up without a trial but I told Troy (Turner) he would be fit enough today.”

Demerit (pictured with studmaster Kent Johnston) spearheads the Lonhro sireline in WA for a $5,500 fee at Taunton Vale.  He hasn’t got a standout at Belmont this Saturday but Lorentinio and Denim Pack are both overdue after promising starts to the season.

Sunspeed’s Winter Magazine spotlights WA Top 2YOs this season.  The latest edition is being distributed throughout WA and will be available at the Perth Winter Sale this Sunday.

The front-cover story can be viewed online here

Taunton Vale will sell four Demerit foals and a colt by Alfred Nobel at the Winter Sale.