Universal Ruler has another WA sires’ title in his grasp after his first-starter The Velvet King bolted in at Belmont on Wednesday.

The Velvet King is trained by Darren Mcauliffe and was never in danger winning the Yellowglen Hcp (1300m) by six lengths from True Defender (Pierro) and Chasing The Ace (Oratorio).  He collected $24,455 in prizemoney and Westspeed bonuses for an Impressive Racing syndicate managed by Kevin Berry.

“He mustered speed and it was all over once he found the front,” jockey Mitch Pateman said.  “He’s very smart and gave me a strong kick in the straight.  Darren has given him time and the owners will reap the rewards once he puts it all together.”

The Velvet King (2g Universal Ruler – Doubleblack Velvet by Show A Heart) is from an unraced daughter of French stakes winner Black Velvet (Black Tie Affair).  Impressive Racing bought Doubleblack Velvet for $7,500 at the 2013 Magic Millions National Sale and her only other foal to race in the west – Velago – won his only start at York last October.

Velago (Delago Deluxe) has soundness issues but there are no such problems with The Velvet King.  “He’s got a big motor and a high-cruising speed,” Mcauliffe said.  “I didn’t think he would get to the race this prep but he’s a sensible type and I have a very high opinion of him going forward.”

Doubleblack Velvet is back in foal to Universal Ruler who has also sired this season’s top-class 2yo fillies Lady Cosmology and Market Ruler.  He stands for a $4,950 service fee at Scenic Lodge. 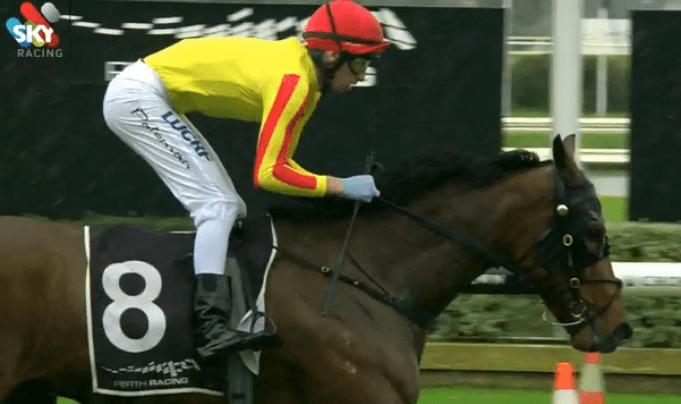