Sydney trainer Gary Portelli has Patronize 2yo colt Patron Black ready for a return to racing for a much-anticipated second campaign.

Portelli rates Patron Black a stakes horse of the future ahead of a first-up assignment in a Class 1 over 1000m at Hawkesbury next Thursday. He was never out of second gear edging out blueblood colt Nordicus in a Rosehill trial on June 8.

Winona Costin let him coast to the line and the caller agreed saying she was; “swinging against the colt and not knocking him around”. The runner-up is a son of Dundeel and Champion Filly Miss Finland. 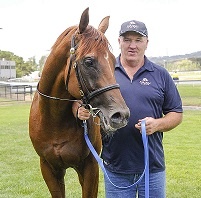 Portelli found him in the Western Breeders’ Alliance consignment at the 2017 Magic Millions. “I bought him with Vin Cox for $46,000 in WA last year,” he said. “I picked up Secret Lady in Perth, too, and I will keep going back there for sure.”