Fast Track is a collaboration between TBA, breeders and TAFE NSW, with those selected for the program to be enrolled in a new Certificate III in Horse Breeding course offered at TAFE’s Scone campus.

The program will see the selected trainees placed on a respected stud farm and then sent to TAFE for two three-week blocks where they will be taught 16 modules such as how to care for mares, handling young horses and mating procedures. 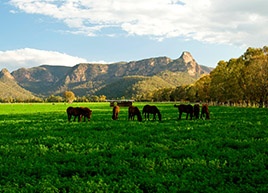 In addition to the TAFE modules, TBA is organising a host of additional lectures and seminars to give the trainees a comprehensive introduction to the industry.  “Last year TBA carried out a survey of breeders on staff levels and the overwhelming response was that more needed to be done to bring people into our industry,” said Tom Reilly, chief executive of TBA and Aushorse.

“The federal government only signed off on a new Cert III in Horse Breeding earlier this year, which meant that we’ve had to work hard to ensure the course was offered by a training organisation and eligible for state government funding.

“I’m really pleased that we have been able to organise this course with Scone TAFE and that the first trainees will be on farms this breeding season.”

Demand for the positions on the course has been overwhelming with over 70 applications received from across the country.  While 12 spots on Fast Track were advertised, it is likely closer to 20 positions will be offered.

TBA director and Widden Stud general manager Derek Field, said he was “delighted” by the standard of those who had applied for Fast Track.  “We have already begun interviewing some of the candidates and I’ve been really impressed: nearly all of them have a strong equine or agricultural background and have been looking for a chance to get involved in breeding.

“I’ve been delighted with the calibre of applicants and I’m sure this is something we can build on to help the industry in years to come.”

As well as organising the program and finding the trainees, TBA will support Fast Track by meeting the tuition costs for the students at TAFE.

“I think a major reason we’ve had such a strong response from potential candidates is that we have positioned this as a first step in a career in the industry, rather than as a TAFE course or junior position, and it’s important that all the farms involved in taking trainees understand the need to help develop and nurture these people,” added Reilly.

It is hoped the program can be rolled out to other states next year, with TBA already in discussions with three training organisations in other states.

There are still a handful of positions available in the first Fast Track intake in July and those wanting to apply or find out more information should visit tbaus.com