Favourite punters gave bookies the message loud and clear when they backed Tellem We’re Comin to win the lucky last at Belmont on Saturday.

The Blackfriars 3yo was resuming after a G2 WA Derby failure in April but was fancied fresh in the Dr James Forbes Hcp (1300m).  Champion jockey Willie Pike reduced the odds of another loss when he speared the winner through a gap in the straight and punched him out to the post.

The ride would have reminded older racegoers of ‘Punters Pal’ Rod Kemp at his rampaging best in the 1980s.

“We had a throw at the stumps in the Derby and it didn’t work but it didn’t hurt him, either,” trainer Grant Williams revealed.  “He kicked back during the break and we put blinkers on today.

“I wasn’t worried when Willie had him well back on the fence.  Willie does what he does and now we will see where this horse can take us.   He’s a nice type and will go through the classes up to a mile.”

The win sent Blackfriars through $5 million in prizemoney for the third season in a row.  Scenic Lodge’s deceased champion accumulated career-best figures last year with earnings of $5,246,443. 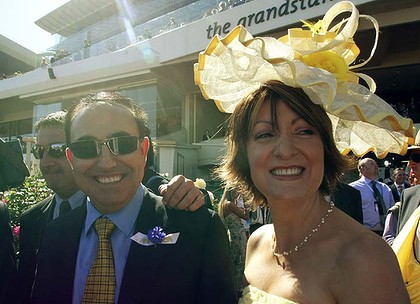 Tellem We’re Comin (3g Blackfriars – Bonny Bonny by Bletchley Park) is a homebred for Elio and Jacquie Galante.  They raced his dam and second dam Our Bonny Lass (Ron Bon) to numerous wins in their dark blue & gold silks.

The Perth couple (pictured) have been valued Scenic Lodge clients over many years and their colours were worn with distinction by Australian Horse of the Year Scenic Blast who was conceived at Scenic Lodge in 2003.

“Bonny Bonny is due to foal to Blackfriars again in spring,” Scenic Lodge general manager Jeremy Smith said this week.  “Elio and Jacquie board three mares here and all three are booked into Universal Ruler.”

The Galante family’s Universal Ruler homebred Snow Lord has won four races at Ascot in the last twelve months.  He’s a stablemate of Tellem We’re Comin and has earned $230,200 in prizemoney and Westspeed bonuses.

Meanwhile in Victoria, Black Heart Bart is building up for his return to racing in the G2 P B Lawrence Stakes at Caulfield on August 18 ahead of the G1 Memsie Stakes worth $1 million on September 1.  Watch the Blackfriars stalwart – with the telltale white heart-shaped marking – before galloping at Coleraine with stablemates Humidor & Big Duke here