Red Army equalled the longest winning trip for a Patronize galloper this season when he claimed the WA Day Cup (1600m) at Northam last month and he stretched out even further on Saturday.

Extended to 2000m in the Argonaut Stockbrokers Hcp at Belmont, he passed the middle-distance test with flying colours.  “I was a bit scared when the other horse (No Say in It) came at him but he kicked again for a very good win,” co-trainer Grant Williams said.  “He’s come back super this prep.”

Patronize sired Red Army (pictured) from Special Spice (Old Spice) who won three races around the provincials for trainer Chris Stelmach.  She was later auctioned at the 2011 Perth Autumn Sale and was spotted by Williams in the consignment from Touchstone Farm. 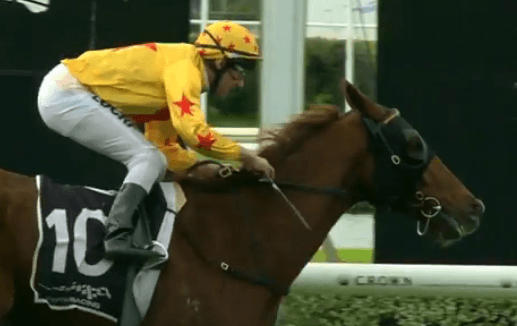 The 10 year-old mare was a good buy at $4,000.  Following Red Army, she foaled a filly by Trade Fair, a colt by Oratorio and is due to God Has Spoken.

Jockey Paul Harvey was confident Red Army would win at the top of the straight on Saturday.  “He jumped smartly and I let him be where he wanted to be.  This distance was more to his liking.  He really ran through the line.”

His Sydney-based 2yo Patron Black has been nominated to race against older horses later this week at Wyong (Friday) and Canberra (Saturday).  Trainer Gary Portelli was pleased with his fresh fourth at Hawkesbury last month which sets up a repeat of his second-up win at Canberra in February.