Vern Brockman’s 2yo son of Rangeview Stud freshman Galah scored by three-lengths after settling in the box-seat for Joe Azzopardi.  He clocked an impressive 33.98s for the final 600m on a Soft 5.

“He was ridden perfectly,” Brockman declared.  “He didn’t have to hunt up and camped on the leaders before kicking away.  The outside draw beat him last time.  This horse has potential and can be a nice 3yo.”

Her So Secret 3yo Watto’s Fury won at Belmont earlier this season and the mare’s yearling filly by Galah was purchased by Kalgoorlie trainer Peter Fernie and Boomer Bloodstock (FBAA) for $30,000 at this year’s Magic Millions.

“He had his mind on the job today,” Azzopardi said.  “He travelled strongly then let down and really hit the line.”

Kakadu is raced by a syndicate that includes Max Andrews, Rob Duggan and Rangeview’s Rob & Jodie Gray.  Galah’s best first-crop runner to date has been Paul Jordan’s filly Party Night and she can finish the season with another win in the Crown Towers Plate (1200m) at Belmont this Saturday.

Galah is a son of Redoute’s Choice from G1 Australasian Oaks winner Rinky Dink (Distorted Humor).  He won the G2 QTC Cup and G3 VRC Carbine Club Stakes and stands for a $5,500 service fee this season. 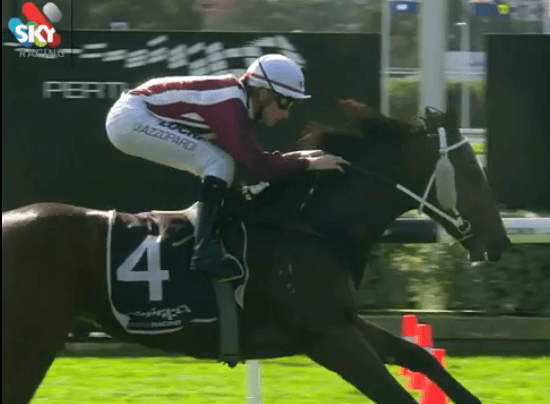