Elvis going places for All American

All American 3yo Looks Like Elvis signed off the season with a barnstorming victory at Doomben on Saturday.

The Bryan Dais-trained galloper settled at the back of a big field before launching a powerful finish in the Team-Australia Group Hcp (1615m).  He scored by over a length zooming clear for apprentice Corey Bayliss.

Looks Like Elvis had won first-up during the Grafton carnival on July 5 and Dais can build his team around the rising miler next season.  Bred by Victorian-based Mark Casey and Doug McLennan, he was knocked down for $110,000 at the 2016 Inglis Classic yearling sale.

The only other foal from his dam Savalook (Savabeel) has been All American filly American Diva who has won up to 1650m at Doomben.  It’s the family of G1 NZ Two Thousand Guineas winner Facing The Music.

“He’s going places this horse,” Dais said on Sunday.  “He’s shown ability right from the word go but had some bad luck during his first campaign earlier this season.  He won a Sunshine Coast maiden on a Heavy 8 but then jarred up at Doomben.  Glenn Colless said it was one of the hardest tracks he’s ever ridden on.

“He was a late scratching when we were caught in traffic on the way to the Sunshine Coast and he missed another run after the races were called off at Murwillumbah.  Then we ran into Pierata at Doomben.  He was beaten fair and square but broke 33s for the last 600m on a day when the leaders dominated.

“He’s an Inglis graduate so I was going to nominate for the Scone Guineas but decided to wait until Grafton.  I hadn’t done a lot with him and thought he was no chance on the corner.  But he’s got a lethal sprint and finished over the top of them with 60kg.

“I couldn’t be happier with the way he’s come on this prep although we’re not looking too far ahead of a 1400m race in three weeks at the Gold Coast.  I bought him for $110,000 on behalf of Jim Critchley and Craig Morrissey at the Classic Sale and we would have lost him if there was another bid.

“He was a bit high on the rump and obviously needed time but I like the All Americans.  They can sprint and stay on good or heavy tracks and he sired Dark Dream to win the Queensland Derby up here last month.”

All American stands at Geisel Park and the Stud’s Open Day has been pencilled in for 1.30pm on Sunday, August 26.  BBQ and refreshments will be provided and all are welcome.

Geisel Park owner Eddie Rigg has priced All American at a $7,700 (inc gst) fee this year and he will parade alongside Vert De Grece ($5,500) and Vert de Grece’s first foals.

All American sired another smart winner on Sunday when Mr America was successful at Devonport.  His dam Glorianna (King Cugat) was sold to Mark Pilkington (FBAA) for $18,000 at the Magic Millions National Sale and her latest foal to race is All American 2yo colt Braggadocios who was placed in his first two starts during the current winter season at Belmont. 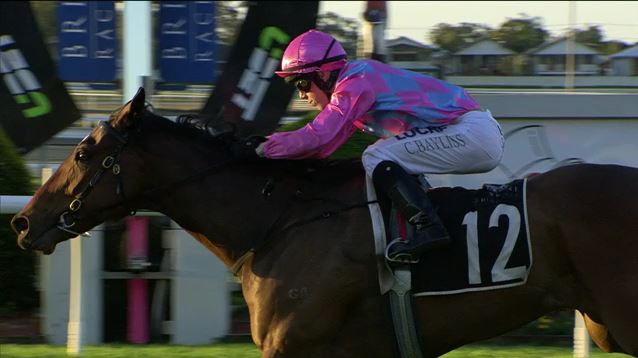