Gold Front Thoroughbreds has trumped the rest of Western Australia with the first foal by its Group 1 winning stallion Awesome Rock.

His filly from Herculian Princess (O’Reilly) arrived on Thursday morning.

Gold Front owners Alan and Sue Olive bred and raced Awesome Rock to a career-high victory in the 2016 Mackinnon Stakes at Flemington and he retired to their 300-acre property near Gingin last year. 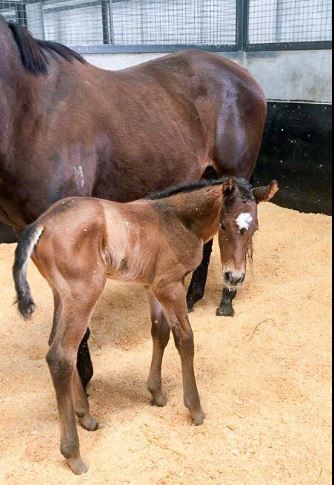 “Mother Nature waits for no one,” Sue Olive said.  “The filly is a fortnight early but is a lovely type and already loves a pat and cuddle.  Mum and Bub are both doing really well.”

The Olives kept a share in Awesome Rock after he made $575,000 at the 2013 Gold Coast Magic Millions.  Among the other part-owners was Stan Saric who sent Herculian Princess west to be part of his first book.

She is a half-sister to Group 1 winner Herculian Prince (AJC Metropolitan Hcp) and will stay in WA to be bred back to Awesome Rock who stands for an $8,000 service fee.

Awesome Rock (Fastnet Rock) began his career winning a Sandown nursery second time out for Leon and Troy Corstens and followed up with a fast-finishing second in the G2 VRC Sires’ Produce Stakes at Flemington.

He was first past the post in the G1 Australian Cup in March 2016 but lost the race in a controversial protest to Preferment.  He made amends later that year in the G2 Feehan Stakes at Moonee Valley before smashing his rivals at weight-for-age in the G1 Mackinnon Stakes.