Based in the Swan Valley at Belhus, Gales bred and sold both winners at the Perth Magic Millions.

Leonardo Da Hinchi (2c Hinchinbrook – Portrait by Octagonal) had won on debut at Echuca earlier this month and was just as effective on the Hillside course in the Ladbrokes Back Yourself Hcp (1300m). Trained by Darren Weir, he cost $100,000 for a syndicate managed by Black Heart Bart’s owner Kim Renner at the 2017 Perth Magic Millions.

Gales bought Portrait carrying Leonardo Da Hinchi for a mere $13,000 at the 2015 Inglis Australian Broodmare Sale in Sydney. The mare has a yearling colt by Alfred Nobel with Roy Rogers and she was covered by Gold Front freshman Awesome Rock last year.

Snipfit (4g Snippetson – Primal Motion by End Sweep) appreciated a 4kg weight relief for a barrier to box victory in the Ladbrokes Odds Boost Hcp (1700m). The rock-solid chestnut had won at Cranbourne and Ballarat last year for trainer Ken Keys and a syndicate that includes his daughter Kasey. 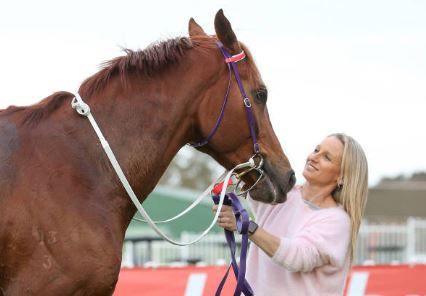 “That was a straight-forward win,” winning jockey Chelsea Hall admitted. “Kasey (pictured with Snipfit) told me he didn’t have to lead but he worked to the front pretty easily.

“He’s hard to run down when he thinks he’s in control and he stayed on the bridle right to the finish.”

Gales had purchased Primal Motion for a bargain-basement $8,000 at the 2013 Inglis Australian Broodmare Sale in Sydney and he received another rewarding dividend when her Snippetson made $70,000 at the 2015 Perth Magic Millions.

Primal Motion’s 2yo is an unraced Reset filly named Set In Motion with Dan Morton and she will foal one of the first new-season Snippetsons off an early cover last year.

Snippetson followed Primal Motion to WA in 2015 and he is the leading active sire available to local broodmare owners at Scenic Lodge. Snipfit improved his record to 89 individual winners of 131 races this season and Wednesday’s result sent him past $3 million in prizemoney.

Scenic Lodge will stand Snippetson for a $6,600 (inc GST) service fee this year.

Hoofnote: Darren Weir and Kim Renner will be hoping Leonardo Da Hinchi’s victory is an positive omen for Black Heart Bart this Saturday. The WA Horse of the Year will be racing first-up in the G3 Bletchingly Stakes (1200m) at Caulfield.

Now a rising 8yo, Black Heart Bart is the all-time leading earner for Scenic Lodge champion Blackfriars and he has opened at $10 behind fellow WA-bred star Vega Magic who is the $2.15 pre-post favourite.