Scenic Lodge will turn full circle when Universal Ruler wins the 2017-18 WA 2YO premiership next Wednesday.

He’s a son of Scenic who put the Muchea nursery on the map with 9 WA flags between 2002 and 2010.  Blackfriars took over as the State’s alpha-male and he will make it 8 titles in succession this season.

That’s a truly remarkable 17 premierships in a row for David and Jeremy Smith who have guided the stud since 1996.  Blackfriars died last December and he should equal Scenic’s tally with a promising crop of 3yo prospects next season.

“Fortunately, Universal Ruler and our other stallion Snippetson have stepped up to another level after the loss of Blackfriars,” Jeremy Smith said this week.  “In retrospect, both have been priced a bit cheap with Snippetson at $6,600 and Universal Ruler at $4,950 but it certainly provides all breeders with a great opportunity this season.”

Universal Ruler built his premiership winning season on the back of class fillies Lady Cosmology, Market Ruler, Angelic Ruler and Bam’s On Fire who finished the season as the best 2yo maiden in Perth following a placing in the G3 Gimcrack Stakes and a fourth in the G2 Karrakatta Plate.

Last month’s Belmont debut winner The Velvet King is the best of the boys by Universal Ruler although Rebel Knight might have something to say about that following a first-up second to boom youngster Samizdat at Belmont on Saturday.

Universal Ruler’s current 2yo prizemoney tally of $744,410 could receive another late-season boost from Salvara and Staralign in the Glenroy Chaff Plate (1300m) at Belmont on Wednesday.

Salvara represents the successful Oakland Park – Fred Kersley combination and she’s bred to get over ground.  Her dam Salvara (Blackfriars) won two city races over 1650m and was runner-up in a LR Belmont Classic (2200m).  The mare foaled a Universal Ruler colt last September and was bred back to Snippetson.

Staralign is trained by Vaughn Sigley for owner-breeders Glen and Jan Kettlewell who raced Rohan (Blackfriars) to victory in the 2012 G2 WA Derby.  His dam Leenornie (Oratorio) foaled a full-sister to Staralign last year and the Kettlewells bred her back to Universal Ruler.

Universal Ruler continues to build his book for the start of the covering season in September.  David Reed has Market Ruler’s dam Market Wrap (Pricelessly) returning to Scenic Lodge and Kevin Berry has booked in The Velvet King’s dam Doubleblack Velvet (Show A Heart).  She is due to Universal Ruler off a September cover last year.

Broodmare owners can inspect Universal Ruler and the other Scenic Lodge stallions by making an appointment with Jeremy Smith on 0419 943 356. 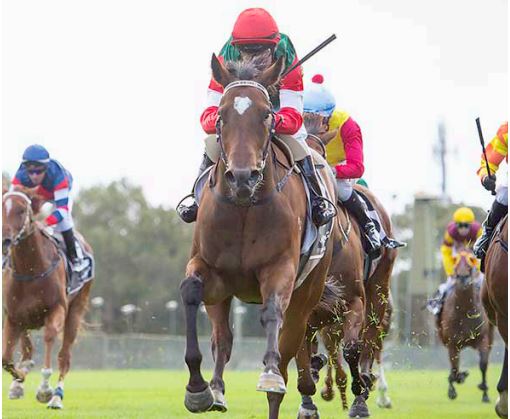