Home Standout for Sunspeed in Queensland

Standout for Sunspeed in Queensland

Jot Joel’s name in the black-book for Brisbane following his up-front win in the Channel 7 Hcp (1350m) on Wednesday.

Joel was given the run of the race behind the leaders and, when slipped some leather in the straight, lifted a gear and put the race to bed under Matthew McGillivray.  Standout wins in midweek maidens at Ipswich are a rarity, however, a high head-carriage and quick turn of foot made it anything but a low-key victory.

Trained by Robbie Heathcote for a Slade Bloodstock syndicate, Joel was a sold by Einoncliff Park breeder Wayne Beynon for $45,000 as part of the Western Breeders Alliance draft at the 2016 Perth Magic Millions.

Former Glenlogan Park stallion Real Saga sired him from All About Soul (Zeditave).  The dam’s first four foals by Charge Forward all won races and her final foal after Joel is a yearling filly by God Has Spoken.

Beynon and his wife Jane are based at North Boyanup and have been active building their broodmare stocks at Magic Millions National Sales.  Among the recent arrivals from the Gold Coast have been Bitter Twist (California Dane) in foal to Winning Rupert and Our Time Will Come (Oratorio) in foal to Kiss and Make Up.

Other mares purchased at earlier National Sales have been Molta (Danske), Curtains (A P Jet) and Zhu Jiang (Ad Valorem) who has an Artie Schiller colt eligible for the 2019 Perth Magic Millions Yearling Sale. 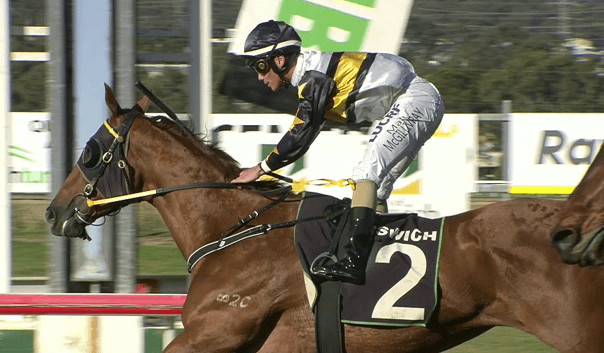