Universal Ruler has increased his lead at the top of the WA 2YO Sires’ table with a quinella in the TABTouch Plate (1200m) at Belmont.

His filly Angelic Ruler overwhelmed his front-runner Nemiroff by a half-length on Wednesday.  The one-two was worth another $29,300 in prizemoney and Westspeed bonuses.

Angelic Ruler (2f Universal Ruler – Tip The Angel by Tip The Pro) had run fourth on debut at Ascot in January and resumed for a fast-finishing third to Baron Bostock last month.  “She got there just in time,” co-trainer Dan Pearce said.  “She’s a good doer and will hopefully work through the grades.

“We have a pretty good opinion of her and the Burgess Queen Stakes and Champion Fillies Stakes will be in our sights later this year.”

Her dam Tip The Angel was bred by Joyce Stowe and won 8 races for the Pearce family with prizemoney totalling $228,600.  She has a yearling filly by Planet Five and a filly foal by Vital Equine.

“She’s still green and I thought we were in trouble when she dropped bit at the 600m,” jockey Lucy Warwick reported.  “But she picked them up and gave me a good feel.  There’s improvement to come and she could end up a nice horse.”

Angelic Ruler is the fourth juvenile winner for Universal Ruler this season following Lady Cosmology, Market Ruler and The Velvet King.  He stands for a $4,950 service fee at Scenic Lodge with Snippetson ($6,600) and Dash For Cash ($2,750). 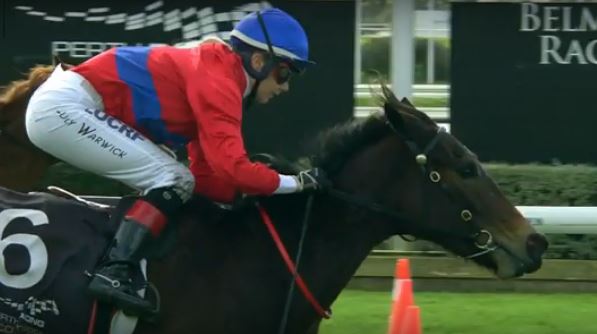