Yindi claimed the New Dimension Air Con Hcp (1300m) during the final city meeting for 2017-18. It was worth $78,000 in prizemoney and Westspeed bonuses for part-owners Neville Duncan and John Jones.

“He took a split in the straight and kicked clear…it was a pretty good ride,” trainer Fred Kersley said as the 3yo gelding returned to scale with Shaun O’Donnell. “He ran right up to his work at home and it was a tough win.”

Yindi is the final foal from Genana (General Nediym), a Northam maiden winner in July 2008 for Jones & Porter Street Investments. “He’s shaping up as a nice horse for next season,” Kersley said after an earlier Belmont win last month. “He lets down and hits the line.”

Yeah Dardy went to another level winning the New Season Sprint (1000m) at Belmont Park on Wednesday for trainer Justine Erkelens. He railed up for Shaun O’Donnell to blouse out odds-on favourite Super Maxi by a half-head.

The lightly-raced sprinter has won 5 times in 15 starts for earnings of $155,400. “He was a lovely-looking yearling and has always shown ability,” Erkelens explained. “But he can be highly-strung at the races and that’s cost him.”

Taunton Vale bred Yeah Dardy and he is fifth and final winner from quality mare Once Upon A Crime (St Jude). She won at Eagle Farm and Doomben and also bowed out a winner in the LR Townville Cup of 1999.

Great Southern trainer Steve Wolfe has a couple of talented Demerit fillies going forward this season. One Point Lady and Demeritise won barrier trials at Lark Hill on July 30 and both shaped nicely with first-up placings this week.

One Point Lady had weighed in behind Trade Prize, Party Night and Market Ruler last season and she resumed with another third at Belmont on Wednesday. Demeritise looks an early winner after racing in traffic on debut down the straight at Pinjarra on Thursday.

Demerit (Lonhro) stands for a $5,500 service fee at Taunton Vale. 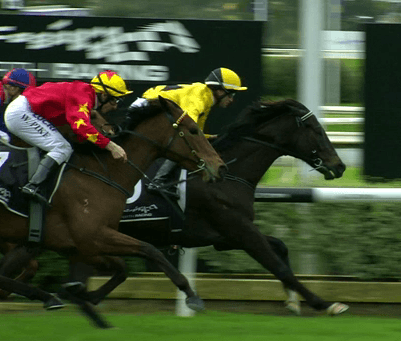