Darling View Thoroughbreds sire Lucky Street has his first foal on the ground in WA.

He served Abitcryptic (Bletchley Park) on September 1 last year and she delivered a filly (pictured) on Tuesday morning.  The mare is owned by Westbury Park’s Phil Ibbotson and her first named foal Cryptic Love won an Ascot juvenile in May.

Owner-trainer Dave Harrison has the My Admiration filly back in work for a black-type campaign this season.  Abitcryptic followed up with a colt by My Admiration and was then give a year off before an early cover to Lucky Street in 2017.

“A ⭐ is born!” Darling View tweeted.  “The first ever Lucky Street has arrived and she’s a beauty.”

Lucky Street (Oratorio), who stands for a $5,500 service fee, was a precocious colt blitzing the 2015 Magic Millions 2YO Classic, LR Perth Stakes and G2 Karrakatta Plate by a combined 10 lengths.  “He’s got what breeders look for in spades,” Darling View stud manager Brent Atwell said.  “He’s by a Champion 2YO sire and was a Champion 2YO in his own right.”

My Admiration (Encosta De Lago) was represented by three juvenile winners in his initial crop last season.  He stands for a $4,950 fee at Westbury Park and its new website can be viewed here 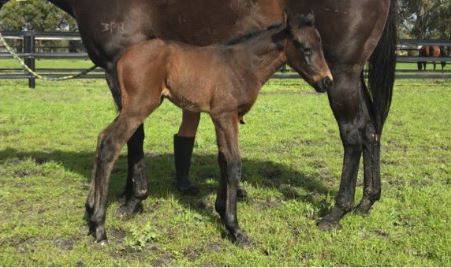