Group 1 trainer Gary Portelli was prepared to take a step back before moving forward with his promising colt Patron Black on Sunday.

The Patronize 3yo was sent to the provincials for an easy kill and made short work of older horses in a Class 1 sprint at Nowra. Sent straight to the front by Jon Grisedale, he won by the best part of three lengths from Don’t Doubt Arthur (Not A Single Doubt). 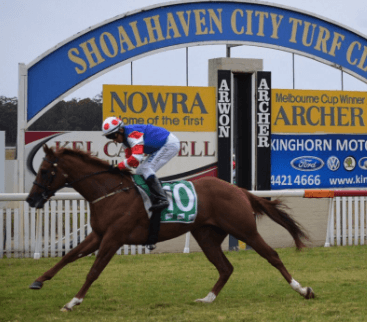 Patron Black (pictured) was beaten by G1 Golden Slipper winner Estijaab on debut at Randwick in January and then travelled to Canberra for a blistering win the Black Opal Stakes Hospitality 2yo Hcp. He was a $46,000 buy for Portelli from the Western Breeders’ Alliance consignment at the 2017 Perth Magic Millions.

Portelli also purchased Golden Gift winner Secret Lady (Choisir) from Gold Front Thoroughbreds on that trip to Perth and she holds a Group 1 nomination for the $1 million Golden Rose on September 22.

He returned to Perth earlier this year for a $100,000 Not A Single Doubt filly from Misty Valley Thoroughbreds that has been named Not Feint Hearted. And the yearling full-sister to Patron Black from WBA will catch his eye at the 2019 Magic Millions in the Swan Valley.

Darling View Thoroughbreds sire Patronize had sustained his winning start to the season at Belmont on Saturday when Patristic broke the shackles in the Kirin Megumi Maiden (1200m). He had returned to Perth after being soundly beaten twice on the Pearl Coast in June.

“He didn’t handle the sand in Broome,” owner-trainer Jayne Busslinger told RWWA. “But he’s always shown a bit of promise and there are more city wins in him.”

Patristic was transferred to Donna Riordan after Busslinger suffered a fractured hip in Broome. She bought him from Huwin Stud’s Hillary Williams for $41,000 at the 2016 Perth Magic Millions.

Williams is based in Muchea and had purchased his dam There She Be (Bletchley Park) from Impressive Racing for a bargain-basement $400. She was carrying the Belmont winner and has since foaled a Universal Ruler colt and War Chant filly.