Rising star Pym’s Royale returned from a quick break to extend his winning run to five straight in the Goldfields Magic Millions Classic (1200m) on Sunday.

The Husson 4yo is unbeaten since winning a Kalgoorlie maiden on Anzac Day. He had been placed on debut at Ascot in May 2017 before moving to the Goldfields.

“He’s going to be a very good horse but I will probably only give him one more run this prep,” trainer Peter Fernie said. “We won’t go to the Hannans. He’s still learning and is going to be a lot better next year.”

Westbury Park owner Phil Ibbotson bred and offered Pym’s Royale through the draft of Western Breeders’ Alliance at the 2016 Perth Magic Millions but took him back home after bidding stopped shy of a $30,000 reserve

Winning jockey Mitchell Pateman told the Kalgoorlie Miner Pym’s Royale has unlimited potential. “He settled very well and when I brought him to the outside, he let-down like a good horse. He has an exceptional turn-of-foot and I don’t think I’ve ridden a horse on a provincial circuit that is as quick as him – he can rip off a very quick sectional.”

Ibbotson had purchased his dam Pym’s Lane (Flying Spur) for $30,000 at the 2014 Magic Millions National Sale on the Gold Coast. Her final foal is an unraced 3yo named Cold Play (Your Song) with Grant & Alana Williams. 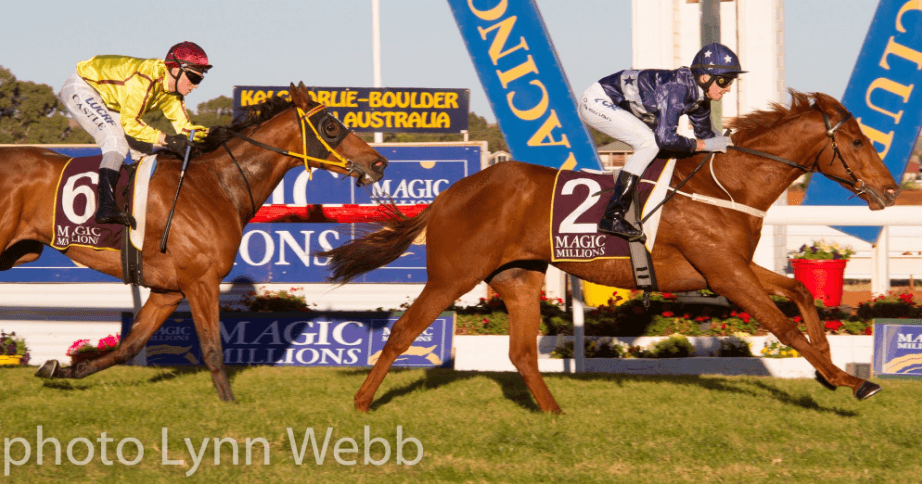