Rafaello snatched victory from the jaws of defeat with a one-length win in the Kranji Stakes (1100m) on Sunday.

A prolific winner on turf, the imported son of Mungrup Stud champion Oratorio was just as effective on Singapore’s Polytrack for replacement rider Barend Vorster. “I don’t know what happened but he seemed to hit a flat spot half-way up the straight,” trainer Ricardo Le Grange said. “It was another solid win and this distance seems to be his bread and butter.”

“Every time those black and red colours win, they make us remember Rocket Man,” Le Grange added. “Fred has been a great supporter from Day 1 and it’s great to win another race for him tonight.”

Vorster reported Rafaello didn’t enjoy a cosy trip. “He took a while to wind up and I just had to keep that momentum going. Then, when I took him back to the inside, he was all guts and glory. He put his head through and showed us again he’s a quality horse.” 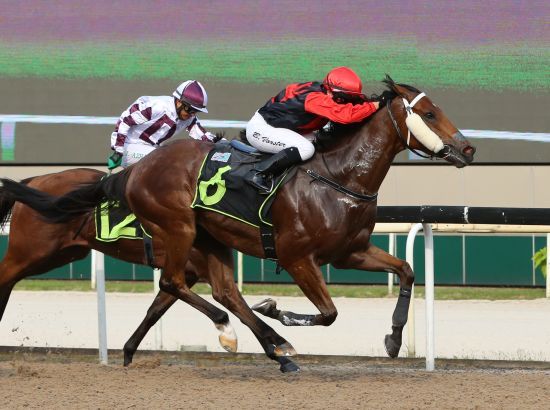