David Harrison added another name to his line-up of 3yo colts and fillies when Snowchino spaced her rivals at Belmont on Saturday.

Still in her first prep, the flashy daughter of Maschino was a convincing winner of the Happy Birthday Jacquie Young Plate (1400m).  Coming off a Northam maiden on August 2, she was hard to miss in front and was always in control to win again from Lookout (Patronize) and Hotham Valley (Playing God).

“She really travelled strongly today and will end up being a really nice horse,” Harrison said.  “She will have a rest now and hopefully she comes back for a race like the (G3) Champion Fillies.”

Harrison is building a strong squad for the upcoming 3yo features at the Ascot summer carnival with My Admiration fillies Cryptic Love & Dawn Armada and Patronize flyer Chix Pic.

Snowchino is by Alwyn Park sire Maschino from Classical Snow (Bletchley Park) and cost $22,000 at the 2017 Perth Magic Millions.  Studmaster John Andrew sold her to a syndicate that includes Harrison, his wife Jenny, Keith Holly and Mario Di Lena.

Maschino (Encosta de Lago) retired to Alwyn Park after a stakes winning career for owner Jim Anderson.  Brilliant filly Fabergino emerged from his first-crop and a bright start to this season will ensure a busier book at a $3,000 service fee.

Ascot trainer Kieran McDonagh produced his Maschino 3yo Cockney Crew at Belmont last Wednesday for an encouraging second on debut to Vintage Stock.  And in the following race, Maschino mare Fa’lion Maschine won her maiden for Graeme and Donna Ballantyne. 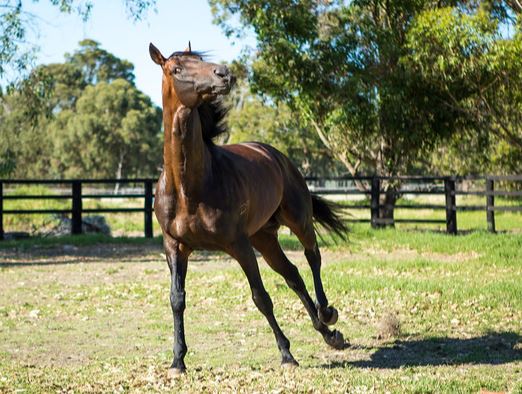