Oorah is one of the finds of the season in Kalgoorlie after another eye-catching victory in the Tilly’s Takeaway Hcp (1600m) on Sunday.

The War Chant (USA) mare only had a York maiden to her credit in 10 starts before transferring to the Goldfields earlier this year. Nevertheless, local trainer Paul Smythe quickly found the key that unlocked her ability to cut down fields with a whirlwind finish.

“I don’t want to claim too much of the credit,” Smythe said shortly after the third win from her last four starts. “I studied the stewards reports and the tapes and noticed she copped interference on a couple of occasions. That could’ve turned her off.

“I removed the blinkers and told Renee (Forrest) to settle her in the one-out line and save up for one sprint. Renee follows those instructions to the letter. She cuddles her out the back and then angles wide for a clear run in the straight.”

Oorah is from the first Australian crop by Yarradale Stud sire War Chant – as is Group 1 winning mare Silent Sedition. She was bred by Michael Grant who trained her dam Street Value (Street Cry) to a Listed victory in the 2011 Bunbury Cup.

Smythe and his wife Jo race Oorah in partnership with Murray Vincent and Brian Curtis. “She’s happy up here but does have a few lurks,” he revealed. “I like the good mares that have a mind of their own. They can be a handful but we treat her with plenty of TLC.

“Murray and Brian work for me and it’s a reward for all their help around the stable when I was sidelined recently.”

Smythe missed Oorah’s first win in June after being barrelled and decked while saddling another runner earlier in the day. He was flown to Perth with head injuries that required a week-long recovery in the trauma ward at RPH.

“We’re not looking too far ahead of her next start in the Tatt’s Cup in a fortnight,” Smythe declared. “That will be a big test. But if she keeps on trucking we could go further into the round for the Coolgardie Cup.”

War Chant heads the 2018 Yarradale Stud roster at an $11,000 service fee alongside Bradbury’s Luck, Gingerbread Man, Heritage and Vital Equine (Rosalee Stud) who are all priced at $4,400. All fees (inc gst). 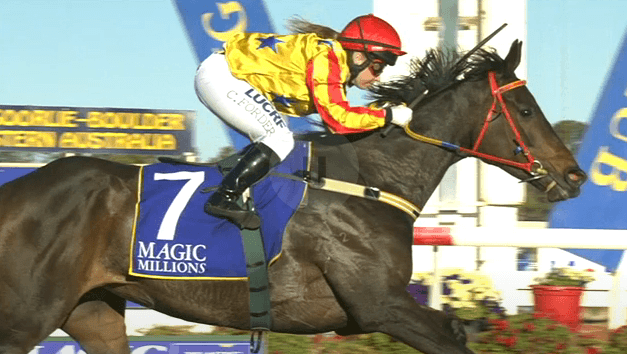