The Trevor Andrews-trained youngster ranged up to Veracini (Oratorio) and edged clear to score by a head at Belmont.  She was the top-priced yearling by Safeguard at the 2018 Perth Magic Millions when making $145,000 out of the consignment from Mogumber Park.

Miss West Coast (2f Safeguard – Coast To The Post by Anabaa) is raced by Robin and Gail Humberston and is a three-quarter sister to Entrancing who won the last of her five races at Morphettville in March.

Safeguard covers alternate books at Mogumber Park and Oakland Park.  This year, it’s the turn of Oakland Park where he’s standing for a $6,600 (inc GST) fee.

Mogumber Park owners Colin Brown and Fiona Lacey are offering a $10,000 credit to the trainers of each of his winners before the 2019 Perth Magic Millions.  It can be used on a yearling purchased from the MP draft at the 2019 Sale.

Monday’s trial followed the feature win of Mogumber graduate Ellicazoom in the G3 Cockram Stakes (1200m) at Caulfield on Saturday.  She set a WA auction record when knocked down to Kitchwin Hills for $420,000 at Perth’s Magic Millions Winter Sale in June.

The Testa Rossa mare was offered by Mogumber Park (as agent) on behalf of Santo Guagliardo.

“I had seen Ellicazoom race in Melbourne so I was familiar with her as a type,” Kitchwin Hills manager Mick Malone said.  “And Grant Burns from Magic Millions couldn’t have been more helpful sending across videos and a lot of information on the mare.” 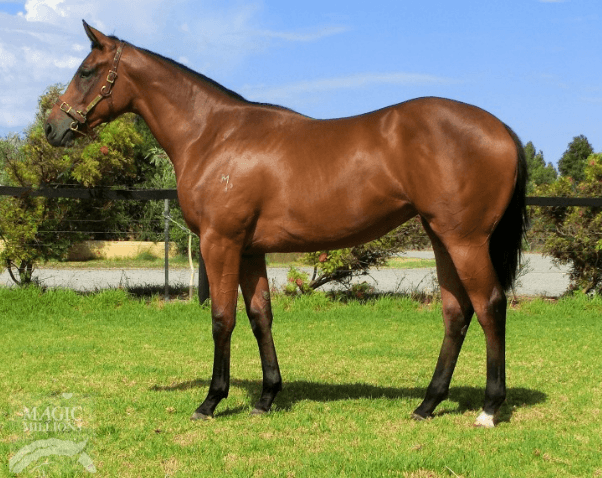