Prying Tom will be given the chance to emulate his sire Black Tom in the LR Kalgoorlie Cup (2300m) on October 6.

The progressive stayer will head to the Goldfields if he continues to improve off a last-start victory in the Marina East Apartments Hcp (2100m) at Belmont.  “He has really come of age and is kicking home strongly,” trainer Sharon Miller said.  “He has matured significantly this campaign and we’re really thinking about Kalgoorlie.”

Prying Tom has been nominated to make it four in a row in the Magic Millions Hcp (2200m) this Saturday.  He’s the only winner from Jewel of Pyrmont (Stylish Century) who won twice on the Gold Coast.

Black Tom was a top-class stayer winning a Perth Cup, Kalgoorlie Cup and Pinjarra Cup for part-owners Alan Hall, Warren Mead and Lyndon Dyson.  He’s the only son of Langfuhr (Danzig) active in Australia and recently transferred from Rivercrest Park to Dunmar Farm north of Dandaragan.

Tony and Nicole Glenn own Dunmar Farm which is located off the Brand Hwy near the Badgingarra State Forrest.  “We’ve had stallions like Gambade and Carpanetto here over the years,” Nicole said.  “We were alerted Black Tom was available by some trainer friends.  They’ve promised to book in and we have our own mares.  He’s 17 but doesn’t look it.”

Black Tom and Port Headland, a Woodman half-brother to G1 Golden Slipper winner Polar Success, will both stand for a $500 service fee this season.  Nicole Glenn can be contacted for further information on 0429 018 630.

Due Sasso is another former Rivercrest Park sire on the move.  He joins Vital Equine (Ire) at Rosalee Park in Serpentine. 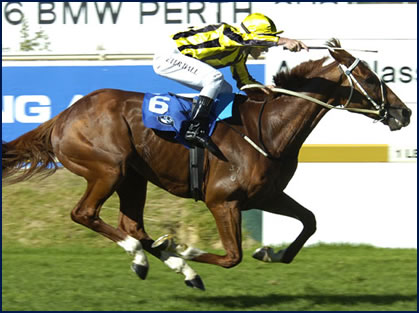