Vital Equine sired a winner with a difference when Monumental Man kicked clear in an Irish beach race on Thursday.

The once-a-year fixture takes place at Laytown, 50km north of Dublin, and is the only meeting run on a beach under the Rules of Racing in Ireland and Britain.

Vital Equine, an Irish bred son of Danetime, covered a sole book at Bearstone Stud in 2008 before transferring to Western Australia. He is owned by Yarradale Stud and stands at Rosalee Park in Serpentine.

Monumental Man (9g Vital Equine – Spark Up by Lahib) is prepared by Lambourn trainer Jamie Osborne for the Melbourne 10 Racing Syndicate. They crossed the Irish Sea with a team of 8 horses and the Vital Equine veteran completed a stable hat-trick following Florencio (Equiano) and Waqaas (Showcasing).

“I had the unenviable task of entertaining nine of my so-called friends who, along with myself, make up the Melbourne 10,” Osborne said after the Bohan Hyland Hcp (1200m). “The lads enjoyed the day with a good few pints of Guinness. It’s our annual trip of stupidity!”

There are no permanent facilities in place at Laytown, with the course itself quickly set up as the tide recedes on the morning of raceday and temporary marquees are used for the weighing room, bars and restaurants.

“It’s all about having as much fun as you can,” Osborne added. “This is our third year here and our strike-rate hasn’t been great until now. The lads haven’t been shy in letting me know about it, so I made sure we were a bit stronger this year.”

Monumental Man has won 13 times in 83 starts and the only other Vital Equine to win more races has been Material Man (14). The Perth star’s intended trip to Melbourne has been shelved due to a hoof problem but trainer Justin Warwick hopes to have him ready for the Ascot summer carnival. 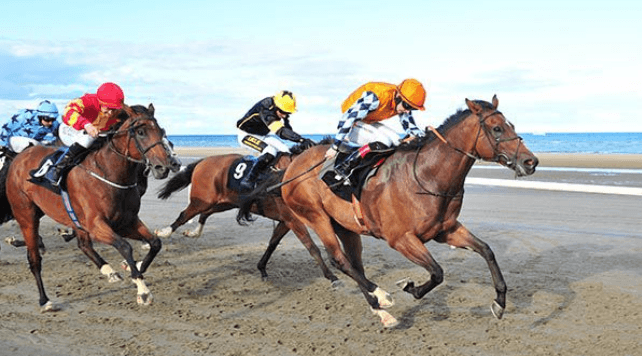