All American import Taro San and apprentice Yusoff Fadzli have both shed their maiden tags in Singapore.

Taro San had won in Australia and he made another breakthrough at Kranji on Friday following a patient ride by Fadzli. “I was a bit concerned when they missed the kick but he didn’t panic and did a good job,” former champion jockey-turned-trainer Saimee Jumaat said. “I didn’t give him any instructions, just told him to go and enjoy the ride, and it’s paid off.”

The winner was placed at his first three starts after arriving in Singapore earlier this year. “I would like to thank my boss for teaching and supporting me,” Fadzli said. “I work this horse and know him quite well. He’s quite easy to ride and ran on very well tonight.”

Taro San had initially raced as Ameridon to claim a Tamworth juvenile in January 2017.

Sent to NZ for the Karaka Million by trainer Liam Birchley, he was the victim of a nightmare trip in the rich sprint at Ellerslie. Jockey Robert Thompson reported his mount was forced wide, lost a hind plate and was inconvenienced when the saddle shifted during the running!

Birchley bought him for $140,000 at the 2016 NZB Karaka yearling sale for a Just Fun Racing syndicate. His dam Celadon (Danehill) was a Flemington juvenile winner for trainer Tony Noonan before relocating to Haunui Farm in NZ. 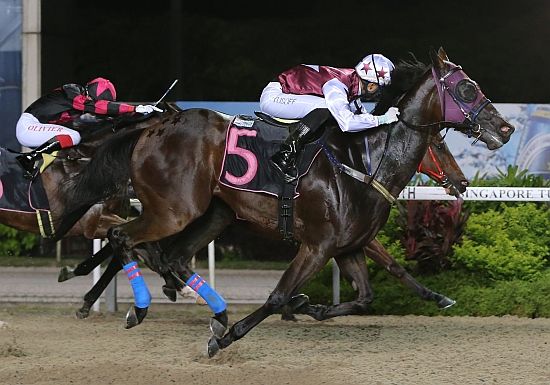