Alwyn Park had all the ages covered last week with 11yo gelding Solsay and 3yo filly Palachino.

Veteran sprinter Solsay (Mosayter) belied advancing years to defy running down in the Holden Colarado Hcp (1200m) at Mildura on Friday.  Greeting the judge like an old friend, he won for the 11th time and is now within $5k of a half-million in prizemoney.

Mosayter (USA) was originally imported to stand at Fairfields Stud in WA before relocating to Argyle Thoroughbreds in NSW.  His new owner Louise Ellis also purchased Fimdal and the mare has a 2yo colt and a yearling filly by Mosayter.

Solsay arrived in the same crop as Mosayter’s Group 1 winner Mr Moet (2012 Railway Stakes) and won 5 races at Ascot and Belmont for local owners Sarino Ballia and Josif Jacob before transferring to Victoria.

Alwyn Park was also in the frame at Sandown on Wednesday when Nariko doubled up in the Clanbrooke Racing Hcp (1000m).  Andrew prepped and sold her (as agent) for $45,000 at the 2016 Perth Magic Millions.

Nariko (Not a Single Doubt) is a half-sister to Perth stakes winner Magic Aces (Dr Johnston) and had won at Moe for an Aquis Farm syndicate before scoring on the Hillside.

Closer to home, Alwyn Park is looking to the future with up-and-coming stallion Maschino.  He is making headway with first-crop star Fabergino and his second includes Cup Night, Snowchino, Cockney Crew and Palachino who won a Belmont trial last week. 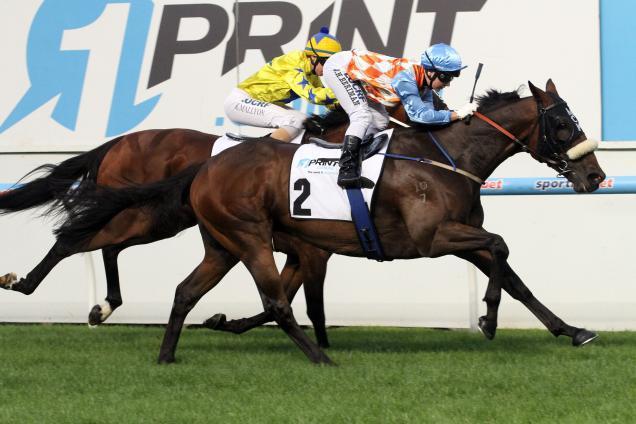