Mungrup Stud stallion Playing God is coming off three maiden winners in a week and his star galloper Lordhelpmerun dodged a setback when the Albany trials were postponed on Friday.

Unexpected rain and hail hit the Great Southern on Thursday evening leaving an unsafe surface at Spencer Park. Lordhelpmerun was one of 20 horses trainer Steve Wolfe had entered for the trials.

The Playing God 3yo won the G3 WA Sires’ Produce Stakes in April and is due to race second-up in the LR Belgravia Stakes (1200m) at Ascot on Saturday week, October 27.

Fortunately for his connections, Albany Racing Club came to the rescue and allowed Lordhelpmerun and stakes-winning sprinter Red Ora on to the course-proper for a special gallop this morning. “They started off at the 1000m and picked up at the 800m,” Albany manager Jack Young reported. “I didn’t time the work but the two riders didn’t give them any stick.”

Lordhelpmerun is quoted at $12 for the G2 WA Guineas (1600m) next month. He had been nominated and then scratched from the TABTouch Classic (1000m) at Bunbury last weekend.

Lordhelpmerun heads the first-crop by Playing God and he’s been joined by York winner Pletto and Wednesday’s Northam winners Playing Marika and Platoon.

Playing Marika (3f Playing God – Just Marika by Grandera) won on debut for owner-breeders Livio and Renato Divitini. She was forced to sprint from the 600m and had to lift again when Over There (War Chant) flew home in the final stages.

Trained at Bullsbrook by Stephanie Bakranich, she is from a stakes-performed half-sister to Doyoudare (LR WA Tatt’s Cup). Divitini Racing has Quilista (Scandal Keeper) engaged in the G2 Caulfield Sprint on Saturday.

He is part-owned and trained by Neville Parnham for a syndicate that includes Ian Loxton who campaigned Playing God to dual victories in G1 Kingston Town Classics. His dam is a half-sister to Magic Millions 2YO Classic winner Lock The Vault (Bletchley Park). 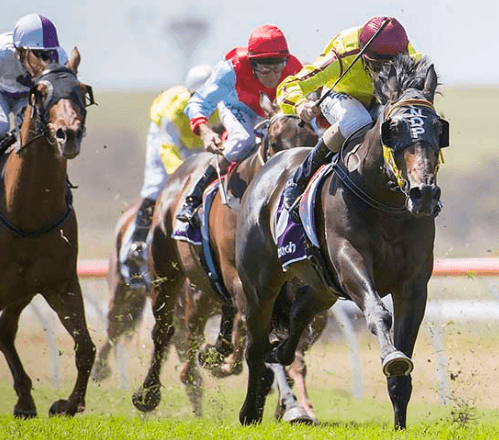